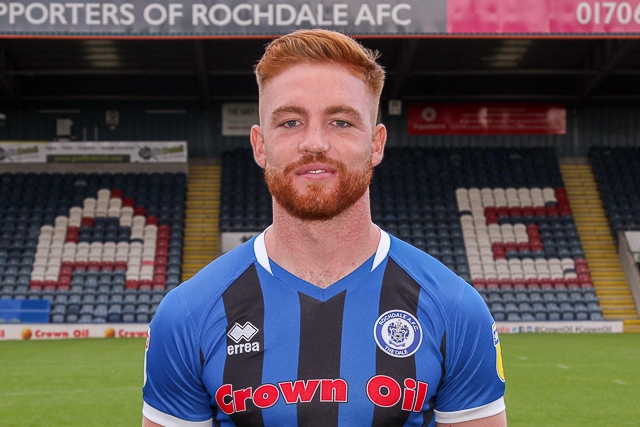 Rochdale went down to a 3-1 defeat at the hands of Burton Albion despite taking an early lead through Callum Camps. The Dale captain lashed in a volley from just inside the area inside two minutes but the lead didn’t last long.

The home side turned the game around inside 18 minutes, firstly through Ryan Edwards and then from the penalty spot after Eoghan O’Connell tripped Colin Daniel inside the box. Dale rallied after the break with both Matty Done and Jimmy Keohane hitting the woodwork and Rekeil Pyke missing a guilt edged chance and were made to pay late on when Liam Boyce made sure of the points with the home sides third.

Club captain Ian Henderson was missing due to an injury picked up in the FA Cup second round game at Boston United on Monday as Brian Barry-Murphy made three changes from that side. As well as Henderson, Aaron Morley was side-lined through injury and Aaron Wilbraham took his place on the bench. MJ Williams and Rekeil Pyke also stepped up, and there was also a welcome return from injury for Ollie Rathbone.

Burton could only name six substitutes, two of which were goalkeepers due to their injury problems but they started on the front foot and earned the first corner of the game inside twenty seconds, but it was Dale who would open the scoring.

A long kick upfield from keeper Robert Sanchez was flicked on by Pyke and as Camps raced onto the loose ball, he brilliantly volleyed past O’Hara with the outside of his right boot to silence the Pirelli Stadium.

The home side responded and sent wave after wave of Burton attack at the Dale defence and the pressure paid eight minutes later. A cross from Daniel on the left was aimed for Liam Boyce but when the veteran striker missed his shot, the ball fell kindly to Ryan Edwards and the Australian made no mistake from 10 yards out.

The turnaround was complete inside 18 minutes when an incisive pass through the Dale defence sent Daniel racing into the area with O’Connell catching the pacey defender giving referee Graham Salisbury no choice but to point to the spot. Lucas Akins stepped up and slammed the ball into the roof of the net to edge Nigel Clough’s side into the lead.

Dale’s afternoon got worse on the half hour when Ollie Rathbone had to leave the field with a groin strain which will be a blow to the Dale manager having just got the ex-Manchester United man back from injury.

Burton controlled the remainder of the first half. Liam Boyce forcing Sanchez into a low save the closest they came to extending their lead.

There was one late chance for Dale during stoppage time at the end of the first half; Jimmy Keohane’s teasing ball across the face of goal was too far away from the onrushing Matty Done for what would have been an easy tap in.

Rochdale needed to improve after the interval, but the early signs weren’t good as Boyce once again brought out the best in Sanchez who had strong hands to beat away the Northern Ireland international’s powerful shot.

Rhys Norrington-Davies, who has been deputising at centre back found himself down the Dale left in the 52nd minute and when the Sheffield United loanee crossed, it was perfect for Pyke but the Huddersfield man headed horribly wide when well placed in front of goal.

Both sides created chances to further their score, but a combination of woodwork and goalkeepers kept the score line at 2-1. Firstly Boyce’ deft header had Sanchez scrambling to his left to push away a sure goal whilst Matty Done’s effort at the other end from the edge of the box grazed the top of the crossbar with O’Hara beaten.

The post came to Burton’s rescue minutes later when Keohane found space outside the area; his shot crashing back off the face of the left hand upright.

16-year-old Kwadwo Baah was introduced as well as veteran striker Aaron Wilbraham as Brian Barry-Murphy’s side looked for a way back into the game and the pair almost combined for the leveller. Baah’s pace got him behind the Burton defence with his centre causing panic in the six-yard box; Wilbraham seeing his close range shot somehow blocked before eventually being hammered clear.

The referee played a good advantage when Camps was caught in the build up to a Rochdale attack; the ball finding its way through to Done although his shot flashed across the face of goal.

Despite Dale’s endeavour in the second half, the game was put out of reach with seven minutes remaining. Boyce twisting and turning two Dale defenders before his low shot squirmed past the outstretched left hand of Sanchez and rolled agonisingly over the line.

In the end the damage was done in a lacklustre first half from Rochdale and they now head into the busy festive period five points clear of the relegation zone with Fleetwood Town the visitors to the Crown Oil Arena on Boxing Day.