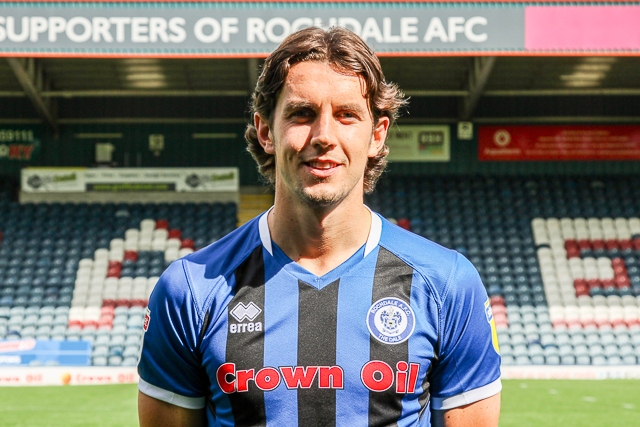 MJ Williams picked up two quick-fire yellow cards in the same incident, and was sent off

Rochdale’s miserable Christmas continued with a late defeat at Gillingham which saw Brian Barry-Muprhy’s side end the game with ten men.

In a battling performance, the Dale goal led a charmed life with Robert Sanchez pulling off some excellent saves whilst the woodwork denied the hosts on three occasions. Just when it looked like Dale would leave Kent with a valuable point, a mix-up between Sanchez and Eoghan O’Connell saw the ball fall to Connor Ogilvie, who headed into an unguarded net. A late skirmish saw MJ Williams receive his marching orders after picking up two quick-fire yellow cards in the same incident.

Brian Barry-Murphy made four changes to the side from the defeat to Fleetwood Town on Boxing Day. Rhys Norrington-Davies and Matty Done were missing through injury with Tyler Magloire and Paul McShane both returned from injury to start. There was also a first start for 16 year-old Kwadwo Baah.

The first half lacked quality with neither goalkeeper tested in the whole 45 minutes. Ogilvie headed against the outside of a post from an Oli Lee corner whilst a brave block by McShane denied the on-loan Hearts midfielder a shot on target from close range.

McShane had to be replaced at half-time with Matty Gillam coming on in his place and the Dale defence had a long half of football ahead of them as Gillingham stepped up a gear. A rare Rochdale attack at the start of the second half saw Jack Bonham tip Kwadwo Baah’s curling shot around the post whilst Callum Camps’ tame effort was catching practice for Bonham.

From then on, it was all Gillingham, who were left frustrated by Robert Sanchez, the woodwork and some poor finishing. Substitute Alex Jakubiak saw a shot hit the post in the 73rd minute whilst two minutes later the home side went even closer when Hanlon’s shot hit the underside of the crossbar before bouncing down on the line; O’Connell heading over to clear the danger.

Dale’s on loan goalkeeper Robert Sanchez brilliantly tipped away Hanlon’s deflected shot whilst the striker followed up another Sanchez save with a poor effort well off target.

The only goal of the game came in the 86th minute in a period where Gillingham looked dangerous. Sub Mark Marshall made space for a cross from the right and despite it looking like a simple catch for the keeper, O’Connell got his head in first to divert the ball over to Olgivie who headed in from closer range.

It was frustrating for the Dale players who had defended well up until that point and frustrations boiled over in a stoppage time melee on the half way line. A cynical trip by MJ Williams sparked a mass brawl and the referee showed Williams a yellow card for the initial trip and a second for his involvement afterwards meaning Dale would end the game a man light.

In the end, Gillingham deserved their win; and, depending on results elsewhere, Rochdale could be in danger of dropping into the relegation zone on New Year's Day when they travel to Accrington Stanley.