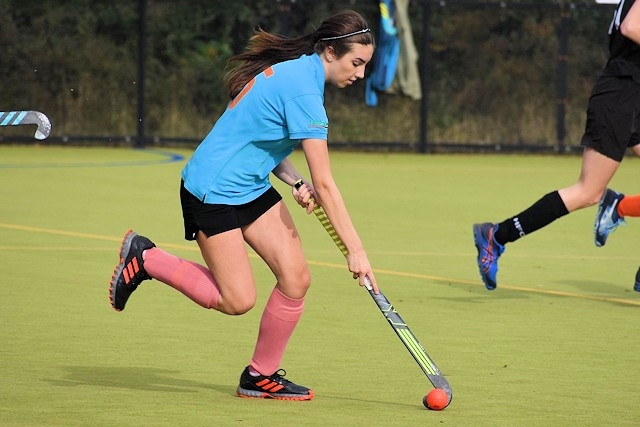 Rochdale Ladies began the new year on Saturday 4 January with a re-arranged game at Oulder Hill against Stockport Fourth team.

It was a cold, miserable day and not the sort of weather you would want to play hockey in. Rochdale were at full strength though and they welcomed back Nikki Monghan in defence and Becky Knowles was making her first appearance since giving birth only 9 weeks ago!

Rochdale looked quite sluggish at the start of the game and although they put together some good passes, they seemed to be panicking and not playing the hockey they were capable of. This was working to Stockport’s advantage as they were intercepting the ball on numerous occasions stopping Rochdale creating any form of attack on goal.

Encouragement from the Rochdale supporters seemed to give Rochdale that bit of a boost and after a good 20 minutes they did begin to play the hockey they were capable of. Roisin Pickering and Dionne Collinson were showing a good understanding of each others movement on the right wing and this was giving Pickering the opportunity to run at the Stockport defence.

Rochdale’s break soon came with a great run by Pickering down the right wing. She crossed the ball and Jenny Banks took a first time shot and this was saved by the keeper but with her attacking instincts there was the on rushing Becky Knowles ready to pounce. 1-0. Knowles was back!

This gave Rochdale the confidence they needed and with solid work in the middle by Kate Brammer, Paula McDonald and Gemma Hodcroft, Stockport were struggling. It wasn’t long before Sarah Ransome picked the ball up on the left wing and made a straight pass to Hodcroft who charged through the Stockport defence and into the D area. Hodcroft took a shot which was saved by the keeper but desperate for a goal Hodcroft carried on and slotted the re-bound expertly home.

Stockport did fight back and they had several attacks into the Rochdale area but defenders Gill Knowles, Brammer, Monghan, Becky Moon and Sam Partington were there to see the ball away.

Just before the half time whistle Rochdale scored another goal. Banks picked the ball up and went on one of her scampering runs. She took the ball round three Stockport defenders and keeping her composure pushed the ball past the goal keeper.

Pickering made a few changes at half time in order to give players a breather and straight from the whistle Rochdale showed their dominance once again. Molly Barker was working hard down the  left wing and making some fantastic runs which were leaving the Stockport defence for dead.

Wanting more goals, Rochdale pushed and pushed. Becky Moon decided to show off her skills with a great pass to Pickering who unselfishly passed the ball to Banks who on her weak side used her reverse stick to sneak the ball passed the keeper.

In the final 10 minutes of the game both teams were showing a lack of fitness and some of the shots made by Rochdale were poor.

Banks did mange to get one more shot on target though which snuck in past the keeper and wrapped up the game and gave her another league hat-trick.

Captain Roisin Pickering said: "We knew it was going to be a difficult game today due to the Christmas break but we got the job done. We will now start back at training and even though we won 5-0 we do have work to do to get back up to the standard we are capable of."