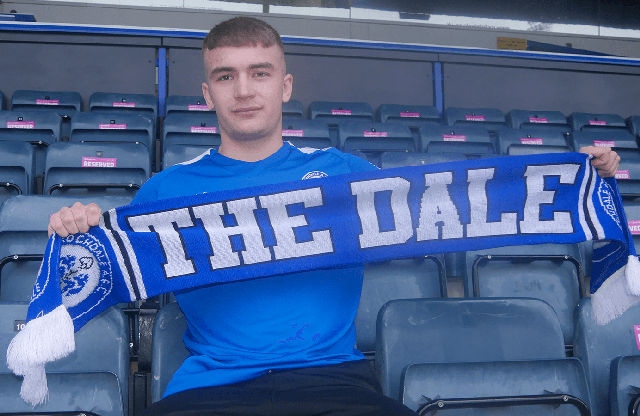 Rochdale AFC has signed 18-year-old forward Keaton Mulvey until the summer of 2021 after he impressed during a trial period.

He scored seven goals in as many games for Curzon Ashton’s Youth Team during their run to the third round of the FA Youth Cup earlier this season, as well as playing for the Dale’s Elite Development Squad (EDS).

On signing his deal, Mulvey said: “It’s a bit surreal but I’m loving it.

“We had a really good FA Youth Cup run this year with Curzon, getting to the third round by beating Blackpool and Oldham Athletic. From there, everything has come about.

“It’s been a whirlwind, but I’ve just got to keep working and improving.”

Manager Brian Barry-Murphy has described Mulvey as a great prospect.

“Keaton has been with us over a period of time and has impressed us greatly with all of his attributes,” said the Dale boss.

“He’s given up a full-time job to join the club and was willing to sacrifice a lot of other things.

“He was so prolific for Curzon that there was a lot of major interest from other Category 1 Under-23 sides that are far higher up the chain than us.

“I could see straight away that he was intent on signing for us and he’s a brilliant prospect and someone that we’re very glad to have in our ranks.”