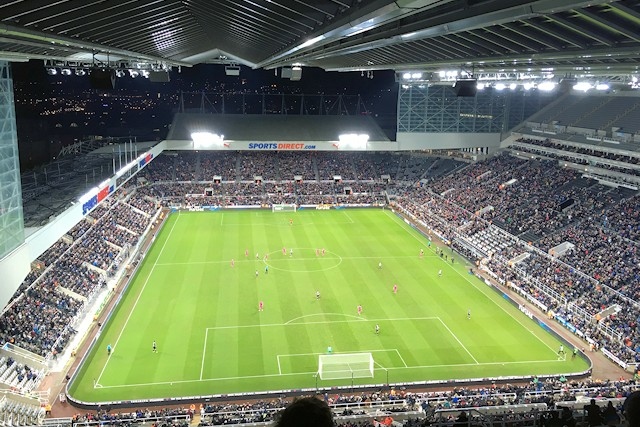 Rochdale went out of the FA Cup in a third round replay at St James’ Park against Premier League Newcastle United on Tuesday 14 January.

Three goals in nine first half minutes gave Brian Barry-Murphy’s men a mountain to climb. Eoghan O’Connell put the ball past his own goalkeeper when Matt Ritchie’s teasing ball in caused problems. Matty Longstaff doubled the lead when he found himself in acres of space inside the box to slot past Sanchez whilst the Spaniard gifted the ball to Miguel Almiron to net Newcastle’s third before half-time.

Dale improved after the break but it was the hosts who extended their lead through Brazilian Joelinton sliding the ball in from Tom Allan’s centre. MJ Williams scored a consolation goal for Rochdale; his first senior goal at the age of 24.

Rhys Norrington-Davies returned from injury to take his place in the starting line-up as Rochdale looked to cause an upset.

The game at the Crown Oil Arena ten days ago saw Newcastle start well and this game was no different although this time Steve Bruce’s side were more clinical as they raced into a 3-0 lead within half an hour with their first three real chances.

Matt Ritchie’s crosses caused Dale no end of problems and when he swung in a brilliant cross in the 17th minute, O’Connell inadvertently turned the ball into his own net whilst trying to block.

1-0 soon became 2-0 when another Ritchie cross evaded the Dale defenders and landed at the feet of Matty Longstaff who had all the time in the world to pick his spot from inside the area.

Rochdale’s style of play is to pass the ball out from the back and when they tried in the 26th minute, they got it all wrong; Sanchez blindly passed the ball to Almiron with the Paraguayan left with the easy task to net his second goal against Dale in as many games.

That goal gave the visitors a huge task if they were to overturn the deficit but they rarely threatened Newcastle keeper Karl Darlow.

Rochdale were forced into a change at half-time with goalkeeper Robert Sanchez replaced by Jay Lynch because of injury.

Whether Newcastle took their foot off the gas a little in the second half it was hard to tell as Dale had more possession and got a little more joy in the final third. Jimmy Ryan flashed a volley narrowly over the bar whilst Dooley headed over from close range when picked out by Norrington-Davies’ cross.

Newcastle’s fourth goal saw relief all around St James’ Park when record signing Joelinton ended a 20 game goal drought. The Brazilian got ahead of Lynch to meet Tom Allan’s ball into the box to score in front of his home fans.

The Dale fans, housed high up in the third tier of St James’ Park, had something to cheer when MJ Williams lashed the ball in off the post from 18 yards out.

It was defeat for Dale but a fantastic night at a Premier League ground having made a few quid in the process.