Hamer gain hat-trick of wins to see out 2019 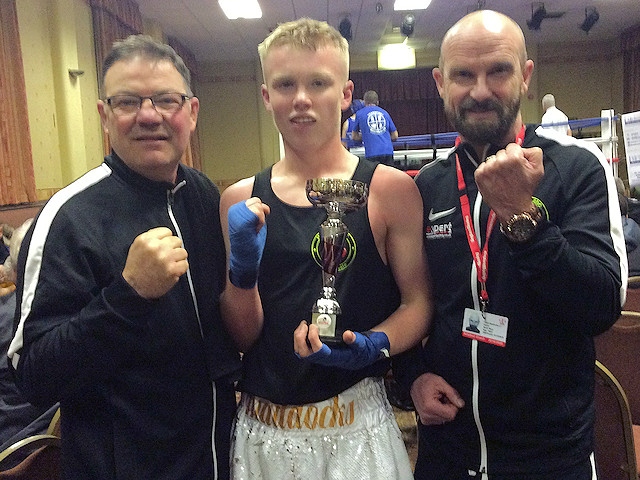 Hamer Boxing Club celebrated multiple victories in December, seeing out 2019 with a hat-trick of wins.

Both boxers came out for the first round, using their jabs to find their range, before Gallagher forced Maddocks onto the ropes with a one-two combination, but the Hamer boxer used clever footwork to slip out of range before landing his own left-right combination. As the round moved on, Maddocks began to settle down into his routine and he began to land numerous one-two combinations, followed by the odd left hook to the side of the face as Gallagher stepped towards him.

Then, with only ten seconds to go, Maddocks forced the local boxer onto the ropes to unload quick punches to both the body and head.

Before the start to round two, Aeron was told by his coach Steven Connellan to continue to wait for Gallagher to step into range with his swinging arms, then step back out of range before stepping back in to land his own power punch. He was also told to step up his work-rate that little bit more if the Phoenix Fire boxer stood off him.

The bell rang to start round two and Maddocks stepped right into action with continuous one-two combinations to the head before landing punishing hooks to the body as Gallagher backed into the ropes. Gallagher attacked the Hamer youth, but Maddocks continued to use swift footwork to slip out of range before stepping back in to unload fast punches. With only ten seconds to go, Maddocks showed his fitness once again by throwing multiple unanswered punches to take the round.

In the third and last round, Maddocks continued to use the ring with quality footwork as he landed telling punches upon his on-coming opponent. By this time, Gallagher began to tire, whereas the Hamer lad continued to unload punches to take the bout by split-decision.

The next Hamer boxer to have his arm raised in victory was 12-year-old ‘Champagne’ Charlie Braddock. He met Curtis Harper of Salford City Boxing Academy at the Higher Irlam Social Club, Manchester on Thursday 19 December.

Throughout the first round, Braddock was a continuous whirlwind as he threw punch after punch at his opponent to force him around the ring. Harper did land the occasional clever punch, but it was the Hamer lad who consistently  landed the last punch after every exchange. In the second round, Braddock continued to show his fitness as he landed punch after punch upon the Salford City boxer who had also upped his game to try and match the Hamer boxer.

Before the start of the third and last round, Hamer coach Steven Connellan told Charlie that he was winning but he would have to continue with his buzz-saw antics and continue to force the action; Harper was boxing on his own show and if the judges saw that the bout was much closer than he thought, then they might lean towards a hometown decision. The bell rang and Braddock stormed out to continue to take the action to his opponent throughout the round with numerous, never ending blows to both the body and head.

The champagne flowed that night in Manchester when Braddock quietened down Harper's supporters with his non-stop action to take the bout by a unanimous decision.

The other Hamer boxer to take to the stage in Manchester on Thursday 19 December was 18-year-old Monir ‘Real Money’ Miah who was to meet Campbell Hatton, the son of world-famous championship boxer Ricky Hatton. Hatton was to step into the ring representing Roy Richardson's Boxing Club, although he was coached and trained by his uncle - the former European champion and world title contender Mathew Hatton.

The bell rang for round one and the Hamer boxer instantly showed that he was not overawed by the occasion, landing a swift right hand to the jaw followed by a solid left hook to the side of the head. Hatton backed onto the ropes and Monir attacked with hurtful punches to both the body and head, whilst Hatton landed punches to the back of the head. Monir then began to box on the back foot and wait for Hatton to force the action and when he did, the Hamer boxer unloaded a swift right-hand punch to the face before moving out of range. Hatton continued to attack the Hamer boxer and Monir used clever footwork to spin out of range whilst landing a fast-left hook to the side of the head. Hatton swung and missed with punches from both fists as he was met by numerous straight one-two combinations to the jaw and with only ten seconds to go, Monir landed another left hook to the head before spinning out of range into his own corner. As Hatton attacked, Monir landed a crunching right-hand to the jaw of his on-coming opponent before swiftly moving out of range again as Hatton nearly stumbled into the corner-post.

Monir started round two with a clever right-hand to the face as he worked off his jab to keep his distance. Hatton continued to force the action whilst the Hamer boxer was content to keep his distance with fast jabs and the one-two combinations before stepping out of range. When Hatton did manage to keep his Hamer opponent on the ropes, he was met with a scintillating right uppercut to the jaw.

Before the start of the third and last round, Hamer coach Steven Connellan told Monir to continue to use his jab for distance and step back out of range when Hatton attacked so that he could land his right hand before moving back out of range. The bell rang and Monir caught Hatton with two swift lead left hooks to the face before moving out of range. Hatton continued his relentless attack, but the Hamer boxer quickly off-loaded fast punches to his on-coming opponent before stepping back out of range. This continued throughout the round with Monir landing straight one two combinations before using his footwork to move around the ring.

Just before the bell rang to end the contest, Monir forced Hatton into the neural corner where he unloaded numerous unanswered punches to take the round and the bout by majority decision.

Hamer coach Steven Connellan said: "It was a great ending to the year for Hamer Boxing Club. All three boxers employed terrific tactics set out for them with great skill. They did our club and our town proud."