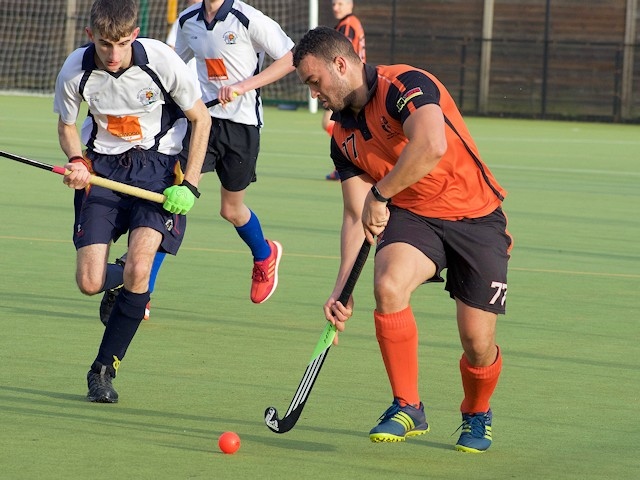 Rochdale Men's Seconds played Bolton Seconds at Oulder Hill on Saturday 18 January in the first home game back after the Christmas break, as they looked to avenge the 4-2 defeat to Bolton Seconds on the opening game of the season. Rochdale started eagerly, however it took a while to find the groove and Bolton had some good possession.

Before long though Rochdale took a quick sideline on the right wing, playing Sean Carney into the Bolton 25 who played a quick one two before crashing a reverse hit home from D top. Bolton heads went down and two more Rochdale goals followed in quick succession. The second was a clever slip from a penalty corner to The Flying Horse man of the match Bjorn Brauns, who calmly slap hit into the bottom corner of the backboard. The second was a well worked goal from the forward line, with some clever passing finding the returning Kane Morgan adding to his tally with a powerful strike.

With a three goal lead, Rochdale dropped back a bit towards the end of the first half. Unfortunately Bolton were too keen to get back in and after some brilliant defending, the ball came to Rochdale captain Tim Liptrot who hit a 50 yard pass to find Brauns who dribbled into the D before calmly slotting it home to give Rochdale a four goal advantage at half time.

Captain Liptrot again the voice of wisdom set the team out to maintain the advantage and catch Bolton on the counter in the second half. To their credit Bolton created some good movement in the midfield but were unable to find a way past the resolute Rochdale back line. A few chances did start to come Bolton's way, but they were largely of low quality, though Rochdale keeper Jimmy Deacy did make some disciplined saves.

Unfortunately however a breakthrough pass made it through to an unmarked Bolton forward in the D and umpire Stephen Woolley correctly awarded a penalty flick against Deacy. It was duly converted to give Bolton a slim hope at 4-1 with ten minutes to go.

Rochdale managed to continue to counter attack, but were unable to convert a fifth and with Rochdale looking the more likely to score next the game ended 4-1 to Rochdale.

Captain Tim Liptrot said: "It was a good performance again from the team, I think we could have scored more if we needed to, but we did it the easy way this week by doing the damage when we had the advantage. It was difficult to pick the man of the match, but with a tireless, disciplined performance that bagged him a brace Bjorne Brauns got the deserved Flying Horse Man of the Match. Next week will be a big test, as we have to go to top of the league Wigton, but we have nothing to lose and they have everything to prove".