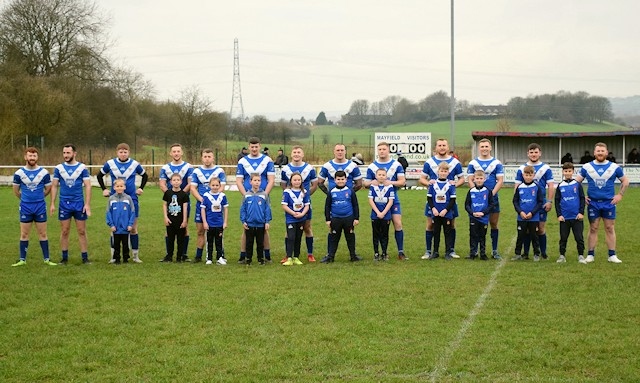 Mayfield overcame a much-improved GB Police side on Saturday 25 January to progress to the 3rd round of the Coral Challenge Cup.

The result was somewhat flattering to the Police side after Mayfield hit the self-destruct button and allowed their opponents back into a game which they had all but secured at 6 -18 and looked in complete control.

The first 15 minutes saw the sides evenly matched with Cole Connolly and James McDaid shining for Mayfield and pressing close to the line. Police responded with a great 40\20 kick from their stand off which saw them have a good spell, in which they enjoyed three sets past the Mayfield 20 metre line.

Connolly relieved the pressure with a well-read interception, gaining thirty yards into Police territory. A needless penalty saw that effort wasted and Police made the most of possession throwing the ball about before their winger squeezed in at the corner to give his side a 4 - 0 lead.

The sides slogged it out with Mayfield maybe trying a bit too hard in possession, giving the ball away in good positions.

GB Police extended their lead with a penalty on the half hour to take the score to 6 - 0 before Mayfield started to stamp their authority on the game.

Hartley and Connolly combined well and the forwards strived to get the better of their opposite numbers. Shaun Hurley, Aidan Gleeson and Nick Hargreaves worked overtime and Hurley was rewarded when he crashed over from 5 metres. Hartley added the two points to level the scores just before half time.

Mayfield were now looking the better side but the sin binning of Harry McDonald plus the half time break interrupted the flow and put added pressure on the team.

The start of the second half saw them dig in and the hard work paid off as it took less than five minutes for Aidan Gleeson to give his side the lead as he followed his own chip over to collect and score. Hartley converted successfully to add two more points to make the score 6 - 12.

With 13 men back on the pitch Mayfield now looked a good side playing some good rugby with Police struggling to maintain the pace of the game.

The Mayfield pack looked strong as Zac Baker, Mark Biggins and Jack McConnachie took the ball to the opposition while Ieuan Higgs looked assured at the back. Great defending from Wayne Bannister, Munya Samanyanga and Lewis Butterworth kept Mayfield in control and when they added their third try through Hurley and another Hartley conversion 6 - 18, it looked like Police would fold.

Within minutes though, Mayfield were under the cosh as they were again reduced to twelve men as McConnachie was sent to the bin. GB Police responded well; upping their game as they sensed a chink of light and they crashed over under the sticks for a converted score, 12 - 18.

No sooner had McConnachie re-joined the fray, Mayfield had Hurley sent to the sin bin in what seemed a bit of overzealous refereeing. Mayfield were in danger of throwing this one away and that would of been a real shame but they got  their heads down and dug deep battering the Police line. The Police defence held firm and it took a drop goal from Zac Baker to give Mayfield a bit of breathing room and again relieve the pressure.

True to form though, Police didn’t sit back, they came right at Mayfield and managed to score a converted try at the end to make it 18 - 19. There was a palpable sense of relief at the final whistle with the Mayfield crowd and players knowing they had been on a knife edge at the end.

After the game coach Sam Butterworth said: “I was pleased overall with the result. We played with twelve men for thirty minutes, due to a combination of naivety and some questionable decision making. Added to that we lost the influential James McDaid due to injury and we still managed to stand up and come through this test on top.

“I'm pleased with the outcome and the performance as a whole. We still have a lot to work on such as the game plan and execution. We also need to improve with ball in hand, but we are moving forward for sure and are now relishing the third round.”