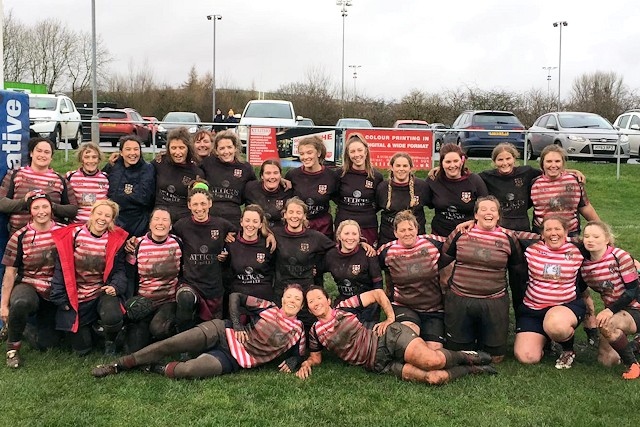 Sunday 26 January saw Rochdale RUFC Ladies make history when they graced the first team pitch for the first time for their game against Aldwinians.

Rochdale’s own Katie Sunderland was officiating her first open age fixture with the support of Gareth Trickett from Manchester and District Referees.

Rochdale's ladies team was first formed in late 2018 and this is their first competitive season.

As the scoreline suggests, the Rochdale supporters were treated to a close and hard fought encounter.

After a miserable morning the game kicked off at 2pm in relatively good weather.

Aldwinians were quick to take the initiative and ground their way up the pitch after multiple carries from their big pack. Whilst Rochdale tackled very well, counter rucking was not present and Aldwinians were soon close to the Rochdale line. Strong tackling from Elsie Wild and Rachel Comyn-Doyle kept Aldwinians from scoring. Handling errors from Aldwinians followed by a strong Rochdale scrum saw Rochdale clear their lines with Alissa France making a 60 yard break. Had she beaten just one more player she surely would have gone the length of the pitch to score.

Rochdale dominated the rest of the first half. Rochdale's forwards carried well and recycled the ball well. Shauna Moore, Janet Morton, Abi Kay, Catherine Coreless, Lucy Gathercole-Turner and Gemma Chang were all present in both defence and attack. Chang was unlucky not to score, being stopped within 6 inches of the line on two occasions.

Natalie Howarth was also just inches from the line before being forced into touch.

Gathercole-Turner was her usual pest like self and disrupted Aldwinians ball well, winning possession. The front five pushed well in the scrums and with work this could quickly become one of the team's strongest set piece plays.

In the backs, Wild tried to break her own record for making the most tackles in a match of rugby. She was sharp at the base of the scrum and it was only the fingernails of the Aldwinians back line that kept her from breaking away.

Beth Harris made her club debut today and did not disappoint. her tackling was outstanding and she kept the Aldwinians danger women at bay.

Despite Rochdale dominance of possession and territory, white-line fever and a determined Aldwinians team prevented Rochdale from scoring in the first half.

At half time Chang and Howarth made way for debutants Harriet Jackson and Neve Epis.

The second half began as the first half had finished with Rochdale on the front foot and Aldwinians now desperate to clear their lines. A strong kick downfield was not strong enough to clear Rachel Comyn-Doyle. Her direct running made ground quickly beating a number of opposition players before placing the ball down in the corner.

Collins lines up the conversion and swung her leg. Good solid contact was made and the ball looked like sailing through the sticks until it dropped short at the very last second.

The game increased in intensity and the work rate from both teams was unquestionable. Debutant Jackson was impressive with the ball in hand and looked like she belonged.

Epis made a positive impact on the wing chasing down several kicks. Her confidence grew as the match continued and the muddier she became the bigger her smile was.

A number of crunching tackles began to go in, particularly from Morton, Kay and Coreless.

Rochdale made the lineout their own and threatened Aldwinians on several occasion without success. Aldwinians however tackled very well and played for 80 minutes with full determination. The ladies efforts were rewarded when after a spell of sustained pressure they forced their way over the Rochdale line. The conversion was unsuccessful which left the score tied at 5 -5.

The final 5 minutes was a played at a breakneck pace and although Rochdale advanced into the Aldwinians half, no score came despite fantastic spirit.

Rochdale RUFC are keen to build their ladies section and a ladies rugby day is being held at the club on Sunday 9 February 2-4pm for any ladies interested in joining the team.