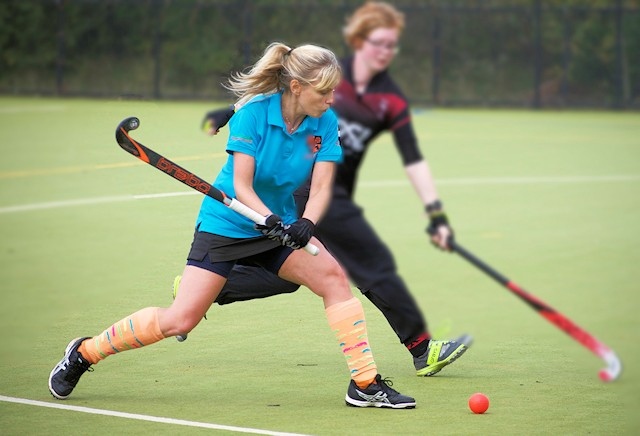 After playing a cup match against Didsbury Northern Ladies Sixth team a couple of weeks ago, this Saturday (25 January) saw a rematch between the two teams. Again Rochdale were hosting, but this time it was a league match.

Rochdale were fielding a strong team with multiple substitutes this week. Keeper; Sam Partington. Defence; Kate Brammer, Dionne Collinson and Gill Owen with Becki Moon and Hannah Palmer substituting each other in right back. Midfield; Gemma Hodcroft, Paula MacDonald and Roisin Pickering with Becca Newton and Sarah Ransome substituting each other on left wing. Forwards; Jenny Banks, Katie Burrell and Becky Knowles on rotating subs throughout.

Having said that, both teams quickly got into a good game, and Rochdale's midfield worked hard to weave between the opposition as the defence successfully crowded out their options to pass and switch. Rochdale's perseverance paid off as they were awarded a short corner. Unfortunately, despite an excellent reception and pass to post by Jenny Banks, it was saved.

Didsbury pushed back, driving down their right wing into Rochdale's defence, but both defence and midfield rallied to keep them at bay, with Sam Partington making a couple of great saves, before eventually the ball went out of play and one of Gill Owen's signature 16 hit outs sent the ball back to Rochdale's attackers.

Play up and down the field showed the determination of both sides, with Rochdale getting more chances on goal but being unable to score due to the skill of the Didsbury keeper well aided by her defence. Both sides earned themselves a few short corners, but these were all well defended and none resulted in a goal.

After another Didsbury attack, Rochdale's defence reclaimed the ball before it was a danger and sent it back to the midfield, after bouncing between a couple of players it was sent to Roisin Pickering, who drove it down the right wing before crossing it into the D, and Jenny Banks was able to pick it up and take a shot, landing it neatly into the corner away from the keeper.

The second half started with Rochdale driving play into Didsbury's defence and holding it there for multiple attempts on goal, their sticks down to catch as many rebounds as possible, but their game of pinball was ended when Didsbury were finally able to clear it. Didsbury drove play back towards Rochdale's defence and managed to win themselves a short corner. Nothing came of it however as Rochdale closed them down before sweeping the ball away from the goal.

With the play back in Didsbury's defence Rochdale went on the offensive, weaving and passing their way down the pitch to get themselves numerous shots on goal, but all were defended or saved and despite Rochdale winning back a lot of the rebounds they were unable to capitalise. Katie Burrell managed to pick up a cross from the wing, but her deflection went just the wrong side of the goalpost.

For a while Didsbury were able to keep play in Rochdale's half, managing to retrieve a number of Rochdale hit outs after cottoning onto the signature strike, before Rochdale changed their play and drove back into the other half of the pitch. With both sides determined to retake the play for a shot on goal. Didsbury's continued efforts to even the score were constantly knocked back by Rochdale's defence, allowing the whole team to push up the field to keep creating opportunities for their strikers, but each one was denied by Didsbury's defensive efforts. Overall both teams played well.

Final score was 1-0 to Rochdale, with goal scorer Jenny Banks.

After the game Rochdale captain Roisin Pickering said: "Didsbury put up a great battle and we had to pull together as a team and work hard for this weeks win. Well done ladies, another 3 points in the bag."