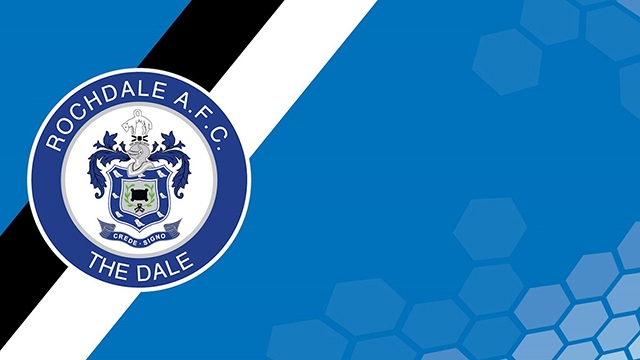 Jimmy Keohane conceded a stoppage time penalty as Rochdale suffered defeat at Stadium MK. The defender brought down Rhys Healey as the home side pressed for a winner with the striker dusting himself down to slot in the winner.

Ian Henderson had earlier given his side the lead when touched the ball over the line, after Eoghan O’Connell’s header looked to be going straight in. MK Dons stepped up a gear after the interval and levelled early in the second half through Norwich loanee Healey who headed in from a corner.

Brian Barry-Murphy made two changes from the side that drew with Gillingham on Saturday. Jim McNulty returned from injury in place of Paul McShane whilst Luke Matheson was rested with Ollie Rathbone starting.

Tyler Smith had a glorious chance to open the scoring when he was played in by Dooley and with the on loan Sheffield United player one-on-one with the keeper, he fluffed his lines and fired into the side netting.

Dale took the lead in the 16th minute. Rhys Norrington-Davies’ corner was headed at goal by O’Connell with Henderson nudging the ball over the line from close range to take his season tally to 14.

Carlton Morris was a thorn in the Dale side and came close on a couple of occasions. The Norwich man sent a low shot that almost caught out Jay Lynch who spilled the initial shot before quickly getting to his feet to smother the danger.

The home side started the second half on the front foot and levelled five minutes after the re-start. A corner from the left picked out the run of Morris who powered his header past Lynch.

The game was a real end-to-end affair with both sides looking for the winner. Dooley fired wide when he found space on the edge of the area whilst half-time substitute for the Dons, Sam Noumbe warmed the hands of Lynch with an angled drive.

With six minutes added time shown, the home side threw everything forward and got their winner when Keohane dived in on Rhys Healey to bring down the striker who sent Lynch the wrong way from 12 yards.

MK Dons closed the gap on Dale to one point with victory but other results mean there is still a seven point gap between Rochdale and Tranmere who are 21st in the table.