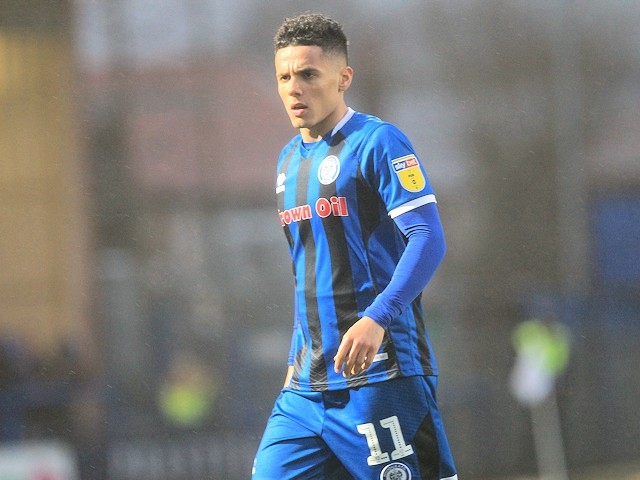 Rochdale substitute Tyler Smith left it late to earn a narrow victory over Shrewsbury Town at a cold and blustery Crown Oil Arena. The Sheffield United striker scored his first goal since joining on loan when he pounced on a loose ball after Ian Henderson’s shot came back off the crossbar. Goalkeeper Robert Sanchez had earlier kept the visitors out with some fine stops as Brian Barry-Murphy’s men remain unbeaten at home in 2020.

A busy day on transfer deadline day saw young defender Luke Matheson leave the club for Premier League side Wolverhampton Wanderers for a fee believed to be around £1million, although he will be loaned back to Rochdale until the end of the season. Former midfielder Matty Lund returned to the club from Scunthorpe on an 18 month deal whilst young goalkeeper Brad Wade went out on loan.

Rochdale made four changes to the side that lost to MK Dons on Tuesday. Sanchez returned from injury and Paul McShane, Aaron Wilbraham and Aaron Morley were also given starts. Matheson and Lund weren’t registered in time to play.

The first half was a scrappy affair on a poor pitch with a swirling wind meaning pretty football was always going to be difficult.

A rare mistake by Rhys Norrington-Davies gifted the visitors a chance in the 7th minute. The left back played a ball across the pitch that was intercepted by Conor McAleny who raced in on goal. Only a brilliantly timed sliding tackle from Eoghan O’Connell prevented the Shrewsbury man from scoring on his debut.

Sam Rickett’s Shrewsbury, who face Liverpool at Anfield this week in an FA Cup replay, were looking the better side as Dale could only produce shots from distance that rarely threatened Max O’Leary. Morley had two shots from outside the box that were comfortable for the stopper.

Jason Cummings, whose two goals earned the replay against Liverpool was thwarted by Sanchez when his angled drive was batted away whilst McAleny was denied by a brilliant low stop from Sanchez.

The game seemed to improve after the break with Rochdale finding their feet in the game but it was Shrewsbury who had the first chance. Josh Laurent found time and space in the box; once again Sanchez was out quickly to block the danger.

The home side used the counter attack to almost take the lead. Jimmy Keohane burst down the middle of the pitch before laying off to Wilbraham. Rathbone on the overlapping run put a dangerous low cross in that saw former Dale defender Ethan Ebanks-Landell sliding in to turn over the bar when it could have easily snuck in.

From the corner, Henderson will feel he should have opened the scoring; Morley’s left wing corner was flicked on at the near post by Wilbraham but Henderson couldn’t guide his header on target at the back post when unmarked.

Sanchez had to be at his best to keep Callum Lang’s goal bound effort out. A corner from the right wasn’t cleared by Dale and when the ball fell to Lang, the striker hit a clean shot towards the bottom left hand corner but Sanchez got a hand to it to keep the ball out.

The only goal of the game came with two minutes of normal time remaining. Norrington-Davies’ cross appeared to hit the arm of a defender with referee Boyeson waiving play on. Henderson picked up just outside the area with his back to goal before turning and sending in a shot which rebounded off the crossbar. The ball seemed to take an age to drop back into the area with Tyler Smith’s header dropping to fellow substitute Matt Done. Done seemingly missed his shot six yards out with Smith taking the chance to net his first goal in Rochdale colours from close range.

It was a real lift for the Dale faithful after conceding stoppage time penalties in their last two away games with the win moving Barry-Murphy’s men ten points clear of the drop zone.