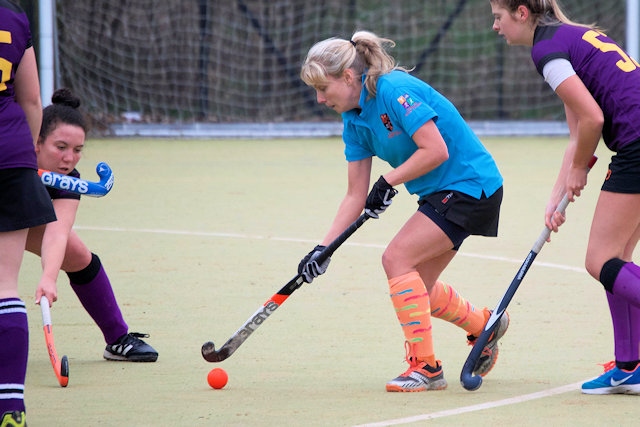 Thankfully the rain eased off by pushback, and Rochdale started strong, with an early start in Didsbury's defensive area, but unable to capitalise on the opportunity.

Didsbury were determined, and appeared to have fitness on their side as they attempted to intercept every ball they could, making things difficult for Rochdale and forcing them to play smarter around them. However, Rochdale were able to drive the ball back into Didsbury's D, but the hit went just wide.

In midfield Paula MacDonald was swooping between Didsbury players to prevent them breaking through to worry Rochdale's defence, allowing the team to push forward to create a couple more opportunities for a goal.

After being awarded a number of short corners and using good team work to hold the play, Rochdale were giving themselves so many chances that keeper Sam Partington had to start doing stretches to make sure she was ready for any Didsbury break.

Didsbury were able to slip through a couple of times - taking advantage of a dip in energy from Rochdale - but each time Rochdale were ready for them, defenders working hard to parry the ball back out of their corner. Becca Newton's tenacious and energetic display on left wing when she was brought on halfway through the first half was the wake up call for Rochdale that they couldn't afford to risk walking this match.

With play firmly back in Didsbury's defensive area Rochdale were determined, passing the ball between a couple of players before it found its way into the D, and Katie Burrell was able to find a hole through the defence to get the first goal of the match.

With their heads in the game Rochdale were back in control, and Roisin Pickering was able to pick up the ball and drive it down the right wing before passing it across, where Katie Burrell again got a stick to it and guided it into the goal.

Half time saw the sun come out and an encouraging team talk in Rochdale's end, focusing on the positives and the few things they had to work on to get the result they wanted.

The second half played much like the first, with Rochdale playing well but Didsbury possibly just pipping them on fitness as they tried to steal the ball, and play was much more evenly spread along the pitch. Rochdale were able to make good use of their subs, with defence utilising their additional player to switch players around to play to their strengths as they needed to come on/off.

As the Rochdale defence prevented another Didsbury attack and sent it back to their midfielders, Gemma Hodcroft weaved her way through towards the goal, passing it off as she ran into the defence and Jenny Banks was able to tap it in.

Rochdale made some great tackles as they were determined to stop Didsbury regaining any ground, but Didsbury were able to retaliate and retrieve the ball to pass around the players, managing to open up Rochdale's defence to give themselves a gap for a runner to take advantage of, and as Rochdale scrambled to cover, Didsbury got a goal.

A few short corners both ways provided opportunities but were defended too well for either side to attain another goal. A Rochdale hit out found Jenny Banks, and determined to get a brace, she drove down and around Didsbury, but as she pulled it across to bypass their defence, the pitch caught her out and she lost her footing.

Another opportunity presented itself to Gemma Hodcroft as she cut a swathe through the midfield, but she couldn't find a way through the wall of defence that formed to stop her. Another Rochdale cross made its way into the D, and with Becki Moon making her up-front debut for the season she made a valiant attempt to get a goal, but was denied. A late short corner in Didsbury's favour gave them an opportunity to reduce Rochdale's lead, but it was cleared without a goal.

The final score was 3-1 to Rochdale, with goal scorers Katie Burrell (2) and Jenny Banks (1).

After the game, captain Roisin Pickering said: “There is no doubt Rochdale Ladies are ready for promotion and another win means we’re that little bit closer to securing a move to the second division. Well done ladies, a well deserved win.”