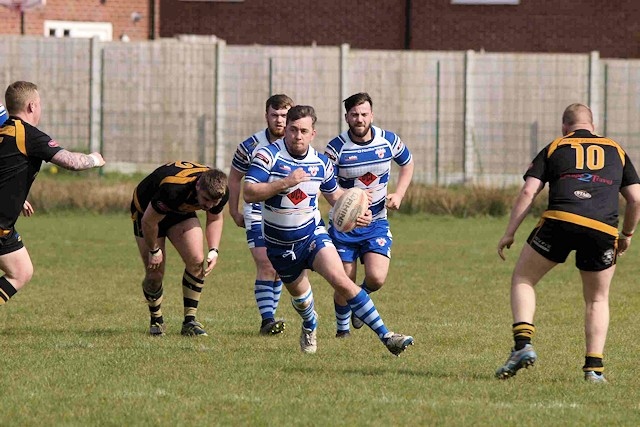 Rob Kershaw is back in contention for this crucial cup game

Saturday 8 February is Challenge Cup day at Mayfield Sports Centre as Mayfield face League 1 side North Wales Crusaders in the third round of the Coral Challenge Cup.

The Challenge cup itself will make an appearance at the game with some great photo opportunities for fans.

Saturday's opponents have a decent pedigree and are the only professional side in North Wales. They finished mid table last season in what was a very competitive league, a creditable season overall.

Crusaders will arrive as favourites for the game but Sam Butterworth and Steve Wood have prepared their team well and will be going onto the field with only one purpose in mind which is to get into the draw for the next round of the cup. Crusaders made it through last season going out in the fourth round to amateur opposition in the shape of Thatto Heath in a thrilling game of rugby. Butterworth is hoping his charges can emulate that feat this afternoon.

Mayfield have put in two decent performances so far in the cup but they will have to produce more this weekend. They will have to stick to the plan as laid out by the coaches, they will have to improve their decision making when in possession and they will have to cut out the penalties - a team of Crusaders' quality will make them pay for every infringement and that could be the difference on Saturday.

Butterworth has again had to ring the changes with Zac Baker and Zac Hartley now playing their rugby with Aussie club Mullimbimby Giants and James McDaid out with a sternum injury. A big doubt is new Aussie signing Adam Vrahnos who tweaked a hamstring at training. On the plus side there are players coming in with Rob Kershaw, Simon Moore, Gee DeSouza, and Sean Mulcahy all available. Butterworth also acknowledged that there could be a new dynamic half back pairing who could turn this game in Mayfield's favour but he would not be drawn on this.

The response so far this season after again losing so many players to the pro game has been fantastic with thirty plus players attending training and the squad improving every session. Butterworth is over the moon with the way the squad is shaping up.

He said: "Things are looking good with quality players stepping up. It's a massive boost to us to welcome back Sean Mulcahy and he looks in really good shape having spent the pre season with Hornets. We are underdogs today but that doesnt bother us we are going out today to give it our best shot and Woody and myself will be happy as long as we do that."

Mayfield chairman Simon Howe is expecting a bumper crowd after the last two ties at Mayfield were really well attended.

He said: "The support for the last two games has been exceptional with the attendance for the last round against the GB Police one of the best for years.

"We have always had a good fan base here and we have noticed some new faces in the crowd for the last two games and that is great to see. Personally I would like to attract more local people to our home games and get them involved in what we have going on down here. Rugby league at this level is superb, it is fast skilful and at times the defence is as good to watch as the attacking play, with some absolutely bone crunching tackles going in.

"I'm sure that once people watch a couple of games they will get the bug. It's not just about the rugby though, the social side is fantastic too with a great clubhouse to enjoy a drink in after the match. Whatever the result on Saturday we invite all supporters to join us in the club and enjoy the atmosphere.

"Admission prices have been set at £5 for adults £3 for concessions and as always at Mayfield, under 16s are free. This increase is solely for the Challenge Cup game and has been implemented after discussion with the opposition, as per cup rules."

Due to the match being televised. the kick off time has been brought forward to 12.30pm.

revised ko time is 12.30. There is also a curtain raiser with the u10's taking to the field at 10.30 so the Mayfield Sports Centre is the place to be today if you enjoy your rugby league