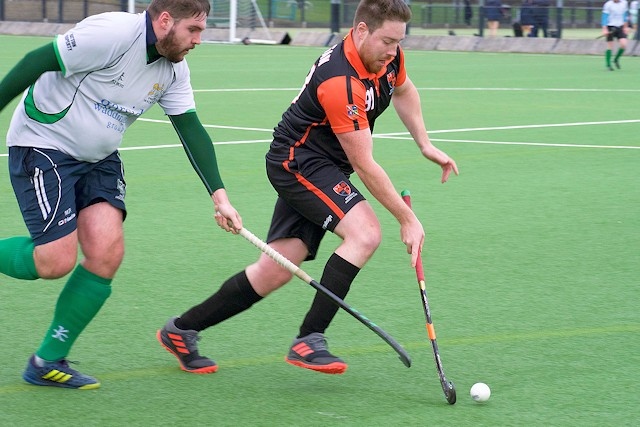 Rochdale Men's Seconds were keen to get a win on Saturday (6 February) against a struggling Preston side after the last two defeats. With some brilliant passing, strong challenges and a goal of the season from natural goal scorer Kane Morgan, this was an excellent game of hockey for the spectators.

Preston started the sharper of the teams and had the better of the opening exchanges with Rochdale’s resolve tested with strong hits striking the defence's feet and also both hands of captain Tim Liptrot. Preston did manage to work a few shots from near the Rochdale P spot, which would have gone in had it not been for Rochdale goalkeeper Jimmy Deacy staying on his feet, making himself big with one shot coming off his helmet and going over the bar.

Rochdale started to find a way into the game, as some calm clearances found the midfield with plenty of space around them. Clinical passing started to put the pressure on Preston’s defence, which led to some good chances being created and the momentum swung in Rochdale's favour.

The first Rochdale goal was soon to follow. A pass from the centre to the left wing was played directly back into the Preston circle to Kane Morgan. Receiving the ball on the strong side with his back to goal, he span 180 degrees in an arc of about two stick lengths before hitting the ball back across the keeper into the bottom corner.

Preston were a little crest fallen for a few moments and Rochdale started to take advantage of this, applying plenty of pressure and playing much more in Preston’s half. Several good shots at the Preston goal came and the pressure started to mount. A second Rochdale goal was looking like it was only a matter of time.

With the ball on Sean Carney's stick at the centre of Preston’s 23m line, he drove at D top, cut left into the circle and fired a reverse hit from slightly wider than he would have liked. The keeper saved it but the ball rebounded and Morgan stole it from a defender, brought it strong side and it hit in the gap between the keepers leg pad and glove with precision.

There was still a good bit of the first half remaining however and after a tactical formation change, Preston started to look threatening again. With some composed defending from the Rochdale back line and brilliant interceptions from Dave Marlow, Rochdale maintained their 2-0 advantage at half time.

It was still all to play for in the second half, as from what Preston had shown in the first they were capable of closing the gap. However at the start of the second half they were content to drop deeper and try a few counter attacks. Perhaps they were just biding their time to strike.

There were several good chances for Rochdale early in the second half, with sharp passing and moments of skill proving threatening down both wings. But it was starting to look like Rochdale wouldn’t find the net again and when tired of trying for simple goals the attempt at goal of the season came off.

A simple layoff to Carney on the left wing, only 5 metres into Preston's half looked like it would result in a simple ball down the line. However after some quick hands to create the space, he launched a 40 metre overhead pass into the open space around the penalty spot. Reacting quicker than everyone else, Morgan took a few steps backwards to leave his defender. Preston’s goalkeeper, thinking Morgan would never get it, left his goal to watch the ball go out of play, but Morgan brought it down with one touch, noticed the goalkeeper was out of position and finished with a one handed reverse stick into the bottom corner for his hat trick.

With minutes still to play, it was a little unfortunate that the game couldn’t end on such a high note. Preston soon started to put Rochdale on the back foot to try and get a goal. They were held back with some excellent tackles from the Rochdale back line, but they did start to win a few penalty corners.

It wasn’t long before one of these was duly converted. Preston didn’t try and do anything fancy with it, just a straight push to the top of the circle which was stopped and then struck slightly high but it thudded into the corner of the backboard to leave no doubt it should stand.

This gave Rochdale a slight scare as there was still a good bit of time left for a Preston comeback. However Preston’s legs had largely gone and intelligent possession play from Rochdale soon ran the clock down to earn a deserved 3-1 victory.

Captain Tim Liptrot said: "We didn’t have it all our own way today, but a largely dominant display meant that at the final whistle the opening ten minutes were forgotten. The Flying Horse Man of the Match was Kane Morgan for completing his first hat trick with that wonder goal. A mention must also go to the vision Sean Carney showed in picking out Morgan with a wonderful aerial pass that traveled half the length of the pitch. Overall it was a good team performance and a great result means we go to Golborne Mens' Seconds (who are level on points with us) next week, looking for another win."