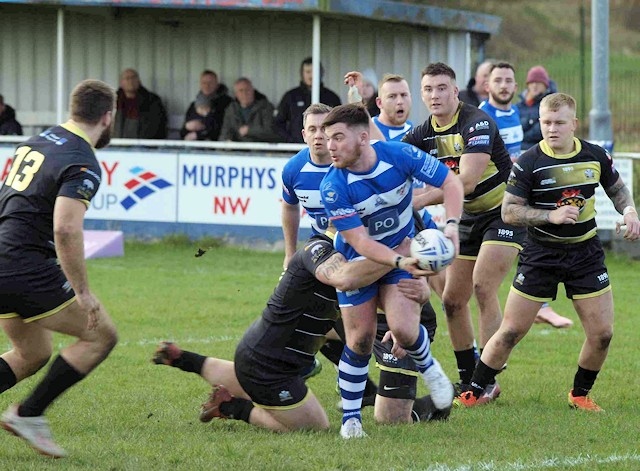 Mayfield were handed a lesson in rugby league in their third round Coral Challenge Cup game on Saturday 6 February by a Crusaders side who played a great game of simple, basic rugby.

This was a real game of two halves after Mayfield put in a spirited first half in which they were equal to if not better than their opponents for long periods. It took a superb tackle on the line from Ieaun Higgs to keep the Crusaders out after the defensive line was slow in moving up and it was just short of 25 minutes before the visitors broke the Mayfield wall after a disputed penalty.

Mayfield responded well as they regained their composure and hit back with some excellent play which resulted in Sean Mulcahy being held up over the line. The outstanding Munya Samanyanga and Lewis Butterworth looked threatening for Mayfield along with Cole Connolly who, with Chris Hough ran the show for a good twenty minute spell. Only a well organised defence kept the home side out.

With about five minutes to go to half time and Mayfield tiring, Crusaders began to take hold of the game with their superior fitness telling as they upped the pace each time they were in possession. Mayfield struggled to keep up and Crusaders grabbed two well taken tries before the break. At half time the score was 0 - 16.

This spell more or less sealed Mayfield's fate and in the second half they looked like a beaten team. Old maestro Chris Hough tried his best to lift the Mayfield players but they struggled to maintain the pace.

Hough forced his way over for a try, converted by Connolly but it was nowhere near enough as the Welsh side seemed to now be scoring at will. They came with a game plan and did not divert from it even when things weren't going their way in the first half they stuck to it and eventually prevailed.

Mayfield need to learn a lesson from this game. They showed in the first half that they were good enough to compete, with all the skills necessary but once tired, they strayed from their objectives and began making mistakes. Crusaders on the other hand kept plugging away and when the mistakes came they punished them clinically.

It didn't help Mayfield that they lost Si Moore to a hamstring injury very early on, then Aidan Gleeson and Ieaun Higgs succumbed to the same before Samanyanga had to receive treatment and strapping for his hamstring.

This meant that an already tiring team was left with limited substitues who themselves were already carrying injuries when they came back to the field. There were bright spots that came out of the game: Lewis Butterworth and Munya Samanyanga looked like a very strong partnership and Higgs was assured at the back until his injury. Young Harry Macdonald looked good and got the pack working well.

The match sponsors went for Cole Connolly for their man of the match while the coaches' award went to Chris Hough for an a good performance while organising the troops.

With four weeks to go now until the NCL season starts these players showed without doubt that if they put the hours in at training they are more than capable of competing and they should be looking at finishing at least in the top half of the table.