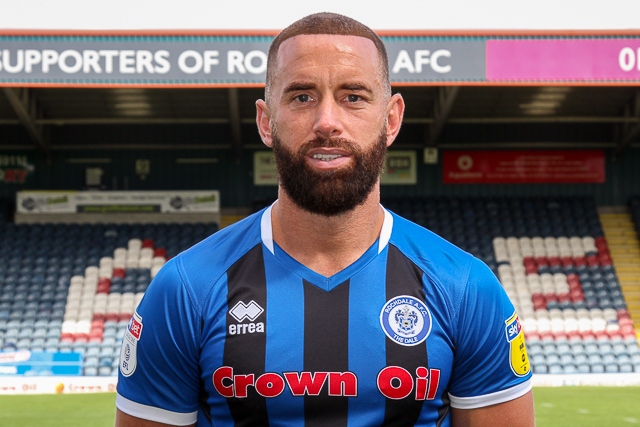 In-form Coventry City left with all three points after a narrow victory over Rochdale at a wet and windy Crown Oil Arena.

Michael Rose headed the visitors into a fourth minute lead when Dale keeper Robert Sanchez misjudged a right-wing cross meaning the central defender had the simple task of heading into an empty net. In awful conditions with swirling winds and driving rain, both sides created chances, but it was Coventry who doubled their lead midway through the second half. Matt Godden’s angled strike went past Sanchez who will have been disappointed he didn’t get a hand to it. Straight from the kick-off Dale got back in the game with a route one goal from Aaron Wilbraham. Jimmy Ryans lofted ball over the top caused confusion in the Sky Blues defence with the veteran striker slotting the ball past the on-rushing Marko Marosi to half the deficit, but City held on the win.

Brian Barry-Murphy was boosted by the return from injury of Callum Camps as the Dale boss made three changes from the last game away at Sunderland. Camps came in for Matty Done whilst Paul McShane and Kwadwo Baah started ahead of Jimmy McNulty and Aaron Morley.

Heavy rain in the area saw the postponement of the Tranmere game last week with the Rochdale board sanctioning the hire of a dome style pitch cover to ensure this game went ahead, albeit on a heavy pitch.

The visitors took an early lead when Rochdale’s on loan goalkeeper Robert Sanchez made a glaring mistake. A short corner routine saw Liam Walsh clip in a cross that Sanchez came for, but got nowhere near allowing Rose the time to nod into the net.

Dale responded well and created some half chances; Ian Henderson firing over after a well worked move down the right whilst appeals for a penalty were waived away by referee Chris Sarginson when Paul McShane’s header from a corner appeared to strike a defenders hand inside the box.

Kwadwo Baah forced a save from Morosi with a low shot from the edge of the area with the big Slovakian keeper having to be at his best minutes later to deny Henderson. Another flowing move saw Norrington-Davies out wide on the left with his centre causing problems for the Coventry defence. Henderson managed to get in ahead of Dom Hyam but Morosi got down well to push the Dale skipper’s effort onto the post; Rose on hand to put the ball out for a corner.

Coventry finished the half the stronger and but for a crucial block by Eoghan O’Connell, they would have headed in at the break with a bigger advantage. The Irishman bravely blocked a Matt Godden shot from close range. That would be O’Connell’s last action as a hamstring strain moments later forced him off.

The second half took a while to get going with Coventry looking the more likely to score in the early stages although Dale seemed comfortable with what they threw their way.

The game livened up as it entered the last twenty minutes. One or two meaty challenges and a couple of cynical fouls got the fans riled but it was Coventry who netted their second. Dale’s playing out from the back went wrong when substitute Jimmy McNulty’s poor pass out was intercepted by Fankaty Dabo who found Allen in space. Allen picked out Godden inside the box and the former Peterborough striker drilled a low shot across goal that Sanchez should have done better with as it went to easily past his outstretched right hand.

The home fans looked despondent as with Coventry’s recent run of form - no defeats in their last ten league games - the game looked over but Dale responded instantly with a goal from the kick-off. Camps laid the ball back to Jimmy Ryan who lofted a ball over the top for Wilbraham to race onto and slot under Marosi for his fifth of the season.

That was as good as it got for Barry-Murphy’s side as they went down to their third defeat in the last five games.