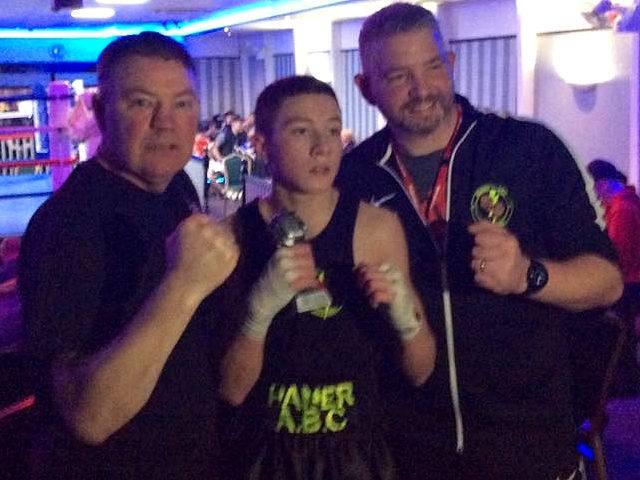 Hamer ABC’s Owen ‘The Storm’ Webster took his second bout by unanimous decision when he travelled to the Eagle Sports and Social Club in Warrington on 6 February.

Meeting Ralf Serkals of Phoenix Fire Amateur Boxing Club, the bell rang to signal the start of the first round and Webster, 15, came out of the blue corner using a swift jab to find his range whilst keeping his distance.

As the round progressed, the Hamer boxer began to gain confidence once he realised that Serkals couldn’t reach him with his own punches. He began to use his jab to set up his combination punches to land upon his opponent’s chin.

Serkals tried in vain to keep up with Webster, but every time he stepped into range, Webster landed a swift counter-punch combination before stepping out of range.

Shouts of encouragement from the hometown supporters pushed Serkals on, only to be met by more punches on his chin. At one point he ended up on the canvas, but the referee deemed it a slip before allowing the contest to proceed. Leading up to the final ten seconds in the round, Webster was in full control and his confidence soared as he continued to land his lightning-fast jab.

The bell rang for the second round and both boxers started by using single jabs to find their range. As soon as Webster realised that Serkals wasn’t going to charge at him, the Hamer boxer began to offload fast combinations to his opponent’s head before stepping out of range.

Webster was growing in confidence and he began to stay in range more often, but he was caught by a powerful left-hook to the head by Serkals, which ignited the crowd into spontaneous encouragement for the local boxer.

He began to attack Webster with vigour, but the Hamer lad quickly put an end to any aspirations Serkals might have had about winning when Webster landed a terrific right-hand upon his opponent’s chin as Serkals stormed in.

Throughout the remainder of the round, Webster maintained his distance whilst landing combinations before stepping out of range.

The bell rang for the third and last round and Webster didn’t disappoint when he stormed out on the front foot to take the fight to Serkals.

Webster began to hold his ground more so that he could land harder punches as he stepped towards his opponent. At one point, Webster landed a terrific right-hand to the chin followed by a swift left-hook and Serkals collapsed onto the canvas.

The referee gave the local boxer a standing eight count before allowing the contest to continue, but by now Webster knew he had the lead so he began to box at his own pace: he landed his fast jab before exploding numerous right uppercuts upon Serkals to take the bout by a unanimous decision.

Coach Steven Connellan said: “It was a terrific, well-schooled performance by Owen and even I was a little surprised at how well he has progressed because when he first came to us, he was a little bit reckless in his work.

“Going off that performance, I have to say, I expect a good future for Owen in this game.”