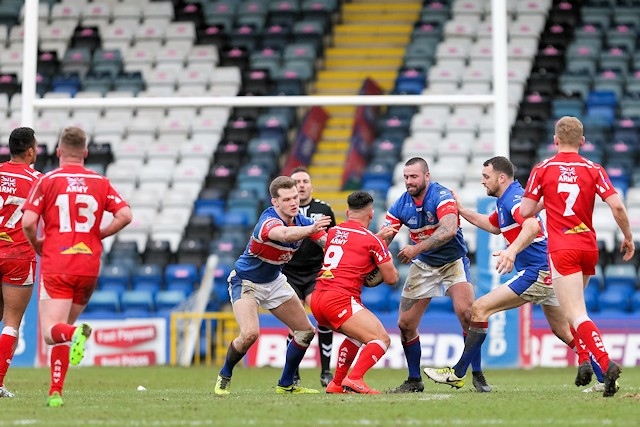 Rochdale Hornets progressed to the fifth round of the Coral Challenge Cup with yet another professional display against the British Army at the Crown Oil Arena.

Despite going behind in the second minute, the Hornets had to dig deep to get past a stubborn and dogged Army team.

In bitterly cold conditions, Hornets took the lead on the seventh minute, thanks to Man of the Match Andy Lea, with Sam Freeman adding the extras.

Next to score was Ben Calland with the first of his hat-trick of tries, right in the corner, giving Freeman an angle he was unable to convert from.

Just after the 15 minute mark, tempers flared and the Army captain was called over but the referee and asked to have a word with his players, with the penalty count against them creeping slowly, but steadily upwards.

Next to score for the home side was Sam Hopkins, and with a much easier conversion, Freeman made it 16-4.

As the half hour neared, the Army were put on a team warning after persistent fouls, with Shaun Ainscough next on the score sheet, and Freeman, who was faultless last week in the win over York Acorn, missing the conversion.

With four minutes left in the half, the Army went over, this time Sean Beevor with the try and Keiron Roche adding the extras to leave the score 20-10 as the teams went in for the break.

The second half began with the Hornets opening the scoring, Jamie Tracey this time, Freeman with a much easier conversion, extending the home side's lead.

Then there was a long break in play as Shaun Ainscough went down.

After what seemed like an age, he tried to leave the pitch under his own steam, only for him to have to be carried off on the shoulders of two of the medical team.

Once play got back underway, Ben Calland grabbed his second and with Freeman now hitting his marks with the boot, Hornets held a 32-10 lead.

They were not having it all their own way though as the Army forced a drop out and then a repeat set before Jack Higginson put the game almost beyond doubt, Freeman again adding the extras.

It was then that a moment of indiscipline really killed off any hope of an Army comeback when Ryan Watkin received a yellow card. This meant that until the 75th minute, they would be a man down, and the home side really made them pay.

Within a minute, Ben Calland completed his hat-trick, before Adam Hesketh scored, with Freeman accurate with the boot, and then Tracey bagged his second with four minutes left, Freeman again on target to leave the final score 54-10.

Dale Bloomfield also left the field with injury in the first half, and there will be an update on the two wingers soon.

The draw for the fifth round was completed on 24 February and Hornets have been drawn away at York City Knights with the game due to be played on the weekend of 12-15 March.

As in the previous two rounds, one fifth round tie will be selected for live streaming by BBC Sport, and another by the RFL’s Our League app.

The eight winners will join the top eight from last season’s Super League – in the sixth round in early April, with the quarter finals following in May.

This year’s Wembley final takes place on a new date of Saturday 18 July.