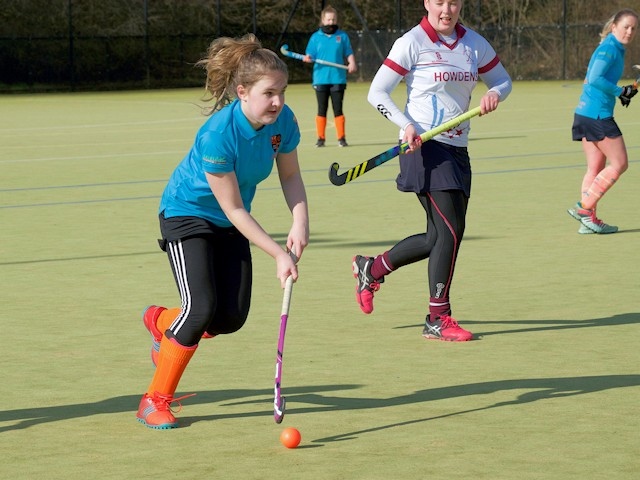 This weekend Rochdale Ladies Hockey team had a full schedule, with a match both days. Their first fixture of the weekend was away at Oldham on Saturday 29 February, where it was windy but dry.

After their last few matches Rochdale were gaining momentum again after the winter break, and today continued that trend with a determined team.

The match started with Rochdale driving forward, holding play in Oldham's defence before eventually losing possession and Oldham drove play back to the other end of the pitch, but the Rochdale defence was ready for them and expertly removed the ball from them before passing it back up the field. For a while play alternated between both ends of the pitch.

However, Rochdale weren't going to give in easily, and kept their heads allowing the midfield to get the ball through the opposition, and Hodcroft drove it into the D and crossed it across, where Burrell was waiting to nudge it in past the keeper.

A foul on Hodcroft in Oldham's D gave Rochdale a short corner, with MacDonald hitting it out to Hodcroft, who passed it off to Knowles who hit it home. A third goal gave Hodcroft yet another assist as she worked with Pickering up the wing before she passed it off to Burrell who collected it and slammed it into the goal.

At half time Rochdale were upbeat, knowing they were playing well as individuals and as team, and quickly highlighted where they could create more chances.

Still hungry for goals Rochdale pressed on, with Moon dribbling the ball down the wing - brushing off anyone who tried to stop her - before dragging it back from the backline to cross it through the D, where Hodcroft picked it up and took a shot and got herself a goal. Even so Oldham were still fighting back, trying to find gaps to exploit and breaking through Rochdale's midfield occasionally, but Collinson and Kate were ready and waiting for them, giving keeper Partington very little to do, with Moon and Palmer backing them up on the wings and Leech and MacDonald helping defend and giving a way back through the opposition.

After such an unlucky attempt on goal last week, when Newton received a pass from Leech she wasn't going to waste the opportunity this time, and weaved her way around the defenders in her way before hitting it into the net, scoring her first ever goal for Rochdale.

A short corner gave Oldham a good chance to catch up, especially when a second was given to conclude the first, but Rochdale had given too much to give up their clean sheet, and defended both well. The final goal of the match went to Leech, after Pickering collected the ball and crossed it quickly across the pitch before Oldham's defence could react, and Leech picked it up, and gave it just enough height to lift the ball over the stick of the only defender in her way and a clear shot into goal.

Team captain Roisin Pickering said: "Any game against Oldham is a tough one, but to come away with a win once again is just brilliant. Each week the ladies come out and play some undeniably top notch hockey. I couldn’t ask for much more”.