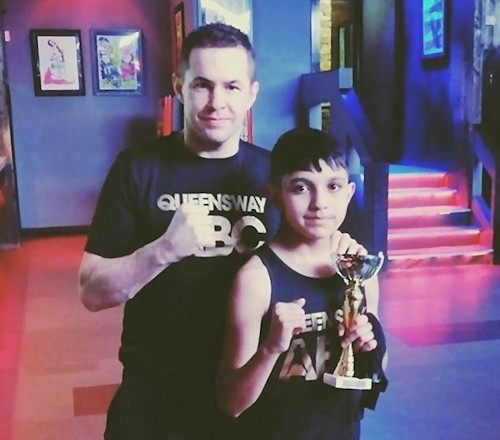 Queensway ABC boxer Ibrahim ‘Ibby’ Malik travelled to Liverpool to the Fusion nightclub to compete in the Salisbury ABC’s home show on Tuesday 25 February where he was given a unanimous win.

It was Ibrahim’s first outing of the season and he was eager to make statement. He was up against Salisbury’s Jake Badrock in the first bout of the night.

As always in Liverpool the atmosphere was electric with a massive crowd cheering on the home boxer. Ibby knew he had to make a fast and dominant start in order to get the judges’ attention – and that’s exactly what he did.

Round one saw Ibby get on to the front foot and take the fight to the Salisbury boxer, who was left backtracking and unable to answer the shots coming to him. With his foot firmly on the gas, Ibrahim dominated the first round, making his opponent miss at every opportunity.

Round two saw Jake come flying out of the blocks – hoping to catch up from the round previous –however Ibby’s footwork proved to elusive for the Liverpool boxer, who was getting more frustrated by the second. After making his opponent miss, Ibrahim landed some nice counters forcing Jake to throw hook after hook in hope of landing something - but it didn’t come.

The third round was pretty much the same as the second but this time the Salisbury had more success landing some nice body shots and cutting the ring off better, but it was too little too late.

At end of the contest, the judges came back with a well-deserved unanimous win for the Queensway ABC boxer.

Coach David Hodkinson said: “This was his first fight of the season so I was expecting a few cobwebs, but he performed better than expected so I was more than happy.”