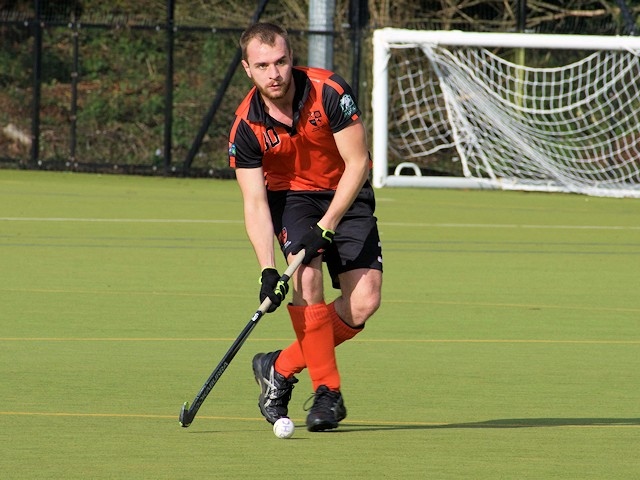 Luke Rosebury was named man of the match

The penultimate game of the season saw Rochdale play Formby at home on Saturday (7 March), with five goals, a high tempo and one unfortunate serious injury (also one black eye) it was a good exhibition of hockey.

Rochdale started at a high tempo which put Formby on the back foot. Through utilising quick pass and move play in the midfield and some driving runs from the 23 metre line towards the D, Rochdale started to open up the Formby defence and started to look like only a matter of time before they broke the deadlock.

Rochdale came close when Kieran Hunter had a driving run from D top to the baseline and pulled it back for Barry Gumbley. He struck a lifted hit with his usual deadly force, but the Formby goal keeper moved his stick up and deflected the ball wide, it was probably just lucky as it would be impressive if he even saw the ball, but an important save none the less.

Rochdale nearly scored again soon after; Aaron Hunter made some good link up play with the forward line to get through on goal, but his quick hit was denied by the post before being cleared after a scramble around the P spot.

Rochdale soon began to rue their missed chances as Formby scored on the counter. A long hit from Formby’s back line transferred the ball quickly to their forwards. Getting the ball wide on the right, they worked the ball in and forced a penalty corner. The first attempt at a drag flick was closed down at the cost of another penalty corner. Formby went for the drag flick again, but this time went more for accuracy and squeezed it over the running defender and over a gap in the goal line defence to put Formby one up.

A second Formby goal was to follow not long after, again from a counter attack. This time coming down the left, Formby moved the ball to the centre before running it from the 23m to the baseline. Again fortune was to favour Formby as their player attempted to cross, but let it go too early and the ball somehow squeezed in at the near post.

Things were starting to look like it was not going to be Rochdale’s day and it was about to get worse. Determined to get back into the game, Rochdale kept attacking and were still enjoying most of the possession. Rochdale were also getting more of the chances. Receiving the ball at the top of the D, Barry Gumbley took the last defender on and hit a powerful shot towards goal. Unfortunately the defender got a stick to it; the ball flew up and struck him in the face which ended up giving him a shiner. After a brief delay to make sure he was ok, a penalty corner was awarded as the ball was lifted off a defenders stick. It was looking like a routine penalty corner as Barry Gumbley swung to strike the ball into the back board with a thud. Sadly however as he swung, his Achilles tendon gave way, resulting in him leaving the field and subsequently attending hospital.

The understandable delay in starting the second half was to work in Rochdale’s favour. A quick succession of direct, quick passes found Aaron Hunter free to slot home with a cool finish to give Rochdale a glimmer of hope. More attacking play from Rochdale kept the pressure on Formby and the chances started to get more frequent. A well timed run from Michael Waddicor got him through in the D and he flicked it fiercely into the goal to put Rochdale level.

Perhaps a little stung, Formby started to play their way back into the game. An attack came down Rochdale’s left and Formby managed to get a man over. With systematic passing they worked the ball into the D and squared it past the keeper for a tap in. The last 15 minutes were fairly even with some chances at both ends, but the match finished 3-2 to Formby.

For neutral hockey fans it was a good match, with Rochdale largely having the better of the possession and chances, but Formby being more clinical on the counter.

The Flying Horse man of the match went to Luke Rosebury, for his constant battling for each and every ball. It would have been nice for Rochdale to get a win in this game as they have a tough match away against top of the league Wigan’s first team to finish the season next week.