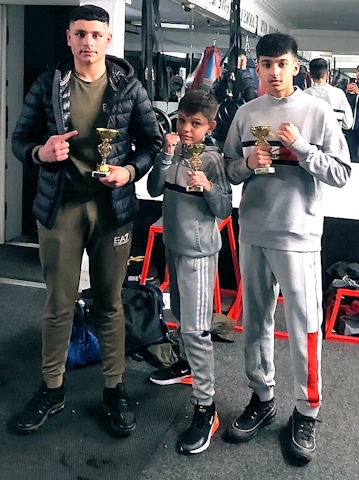 Sarhan Khan faced a 6'3" 73kg middleweight giant, who came out all guns blazing and landed a big right-hand on Sarhan which bust his nose. Sarhan recouped and remained composed, sticking to his game plan to then dismantle his opponent round by round, closely stopping his opponent in the third round.

With Sarhan’s opponent two rounds behind, he was left back-tracking going into the third round. Sarhan knew his opponent was dangerous and had to use his boxing IQ, and that's exactly what he did.

At the end of the contest, the judges came back with a well-deserved unanimous win for Sarhan.

Adam Ahmed made his amateur debut with a second round stoppage against an experienced boxer from Doncaster in his hometown. The atmosphere was electric with a crowd cheering on their local boxer. Adam knew he had to make a fast and dominant start in order to get the judges’ attention – and that’s exactly what he did.

Kamran Malik had his first skills bout and although his opponent weighed in heavier, that didn't faze Kamran one little bit. Starting strong, putting his opponent on his back foot, Kamran was highly skilful and made his opponent miss at every opportunity.

It was a very dominant performance by Kamran under his new coach Ibrar Khan.