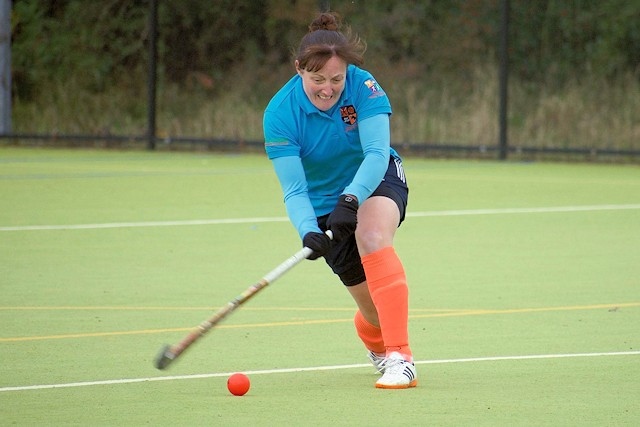 The player of the match was Jenny Banks

This weekend Rochdale Ladies Hockey were away at Horwich, on a cloudy, but just about dry, Sunday (15 March).

With the end of the season approaching, Rochdale wanted to preserve their winning streak, and that was clear from the way they played from the start.

Horwich were determined to make things difficult for them, especially by intercepting any stray passes and marking out players. However, for the most part, Rochdale were able to control the ball and kept their cool in midfield to pass it between players and keep possession. This eventually paid off as MacDonald drove the ball down the pitch to the baseline and then across into the D to take a hit that bounced off one of the Horwich players and into the goal.

Horwich pushed back, more determined than before and deciding their best bet was to barrel down the pitch without much care for what was in their way. For a while, play went back and forth between ends, but Rochdale tracked both well, coming to defend as a team and pushing up to attack as a team.

At half time Rochdale were optimistic but frustrated; they were playing well but they needed to remember to play their game and not get drawn into anything else. They were giving themselves opportunities; they just needed to capitalise on them.

Shortly after play resumed, Horwich got two short corners in their favour. The first Rochdale were able to defend well, however, in the second Horwich were able to find a gap in their defence and evened the scoreline.

Rochdale refused to give in and pushed back strongly, with the midfield working hard to find a way back to their attacking zone. Despite a couple of interceptions Rochdale were able to get the ball into the D, and Burrell took a hit that clipped the post and went wide. Horwich took the opportunity to take back control and the teams were evenly matched for a while.

About halfway through the half, play was interrupted as a strong hit split the ball in half and a new one had to be sourced. Rochdale got the free hit and passed it up the pitch to where it eventually found Banks, who drove it across the D to bring the Horwich keeper out and saw the opening, unfortunately her hit was just wide of the goal and hit the back fence instead.

Presently Horwich were able to find a break, and making good use of their subs allowed them to put on a burst of speed that got them through most of the Rochdale players, who did their best to get back, but Horwich didn't waste the opportunity and took the shot before Rochdale could properly turn to block their players and their second goal allowed them to pull ahead.

Disappointed but not beaten yet, Rochdale pressed back like they meant business, knowing that they were in the last stretch of the game and giving it everything they had left. Playing smartly and switching players to cover as they opened up their opportunities and got it back into Horwich's defensive zone. After a couple of long corners in Rochdale's favour, Banks picked up the ball in the D, drove to the side before crossing it into the gap left and hit it home.

Final score was 2-2 to Rochdale, with goal scorers Paula MacDonald (1) and Jenny Banks (1).

Captain Kate Brammer said: "It wasn't the result we wanted today, but we all did each other proud and carried on giving it one hundred percent even when things weren't going our way.

“We were unlucky today, but we can hold our heads high after that display of teamwork and sportsmanship."