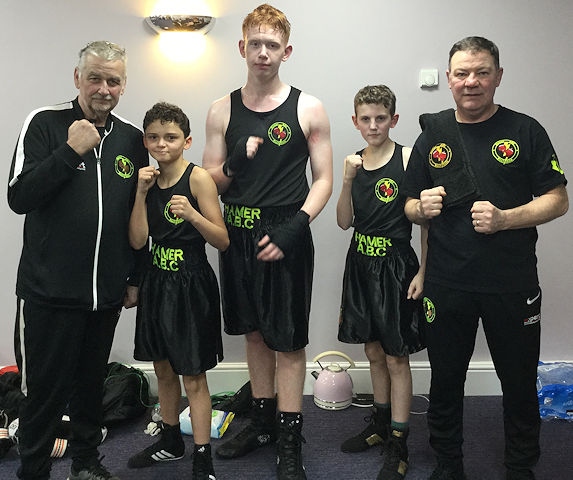 The 14-year-old fought Roman Spenser of Spartan ABC in a very closely fought contest in which both boxers gained success. The match started with caution from both boxers which gave McMenamy the momentum as he used his much longer reach to his advantage to keep Spenser at bay. McMenamy used the ring to his advantage by constantly moving around upon his toes before planting his feet to land his punches to take the round.

At the start of the second round Spenser stormed out of the gates like a whirlwind. As expected, he began to take the fight to the Hamer boxer throughout the round. He forced McMenamy into the neutral corner to unload swinging punches to both the body and head before McMenamy used the ring ropes to neatly step to the side to regain some distance from his opponent before landing a crisp counter punch upon Spenser. This forced him into his own corner and McMenamy unloaded another solid right hand to the chin.

Spenser once again rushed out of that blocks at the start of the third round, but the Hamer boxer managed to land a punch to the eye of Spenser whose head snapped back. That all but ended the matchup and McMenamy took the bout by a split-decision.

Also on the match card was 12-year-old Austin Heneghan, who lost on points to Aadiy Qadair of Warrior Breed Boxing Club. The Hamer coaches had struggled to get Austin matches since November 2019 because of his winning record. His opponent Qadair was seven months older and three pounds heavier than Austin, which eventually showed as the bout progressed.

16-year-old Luke Whitehead also made his first appearance for Hamer ABC, losing on points to James Gavin of Preston and Fulwood Boxing Club.