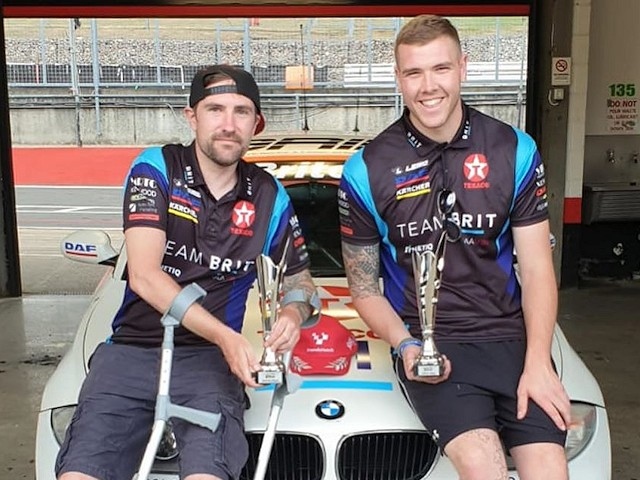 Racing with Team BRIT at Brands Hatch in Kent, Matty, who lives with autism, and his teammate Andy Tucker were awarded third place in their two races.

Team BRIT aims to be the first all-disabled team to race in Le Mans, France, and supports people with physical and psychological challenges in accessing motorsport through its racing academy. Matty previously raced with the team as part of its 2019 season.

Matty was one of the team’s four rookies racing in the Britcar Trophy Category in a BMW 116 last weekend. Experienced racers Bobby Trundley and Aaron Morgan raced in the team’s Aston Martin V8 Vantage GT4 in the Endurance Category.

24-year-old Matty said: “I had an amazing weekend at Brands Hatch with the team, with everyone putting in a great performance.

“For Bobby and Aaron to get P3 on Saturday, then for me and Andy to do the same on Sunday, not once but twice, is just amazing.

“An amazing strategy call from the team allowed all three Team BRIT cars on Sunday’s second to be running P2, P3, P4 after the pit stops. It led to a really interesting final few laps. Great fun!”

He studied motorsport engineering then went on to secure a degree. He worked at Rochdale TeamKarting circuit while studying and became executive manager at the age of 19. In July 2017 he raised enough investment to buy out the business and become CEO.

TeamKarting is now the UK’s highest rated karting track and has won an award for being Autism Friendly.