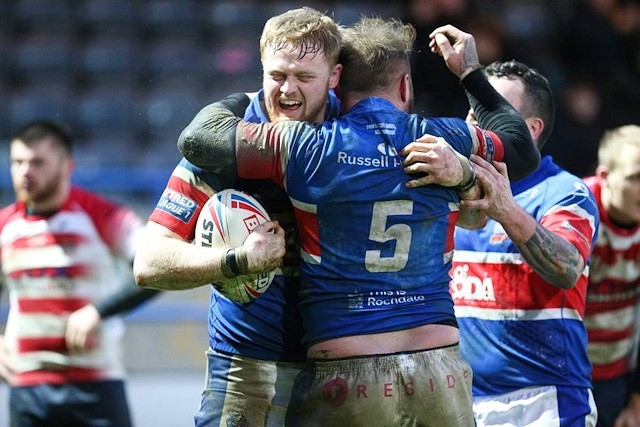 Callum Ogden, Ben Calland and Luke Fowden have signed contract extensions with Rochdale Hornets which will see them all stay at the club for the 2021 season.

Luke Fowden originally joined Hornets in 2016, before appearing again this year and is another strong example of the link between the club and Rochdale Mayfield.

"I'm delighted to have signed a new contact with the club and I can't wait to get started again," he said.

"It's great to see other teammates re-sign for 2021 and we are all looking forward to a big year under Matt Calland and his staff and under the new board in a new era."

On the extension, head coach Matt Calland added: "I am delighted to have Luke on board for next season.

"He is developing nicely and has great punch in his carries.

"He is another local lad who has a great appetite for the game and I look forward to working with him again."

Callum Ogden joined the club ahead of the 2020 League 1 season from Doncaster, and came through the successful junior set-up at Rochdale Mayfield before joining the Bradford Bulls academy.

"I’m over the moon to have signed another year for my hometown club again for the 2021 season," he said.

"Matt Calland and Andy Mazey are building something special at Rochdale and there is a massive buzz about the place."

On the re-signing, head coach Matt Calland added: "Callum is a great, young talent. He has solid distribution and a precise kicking game.

"He is another local lad from the great Rochdale Mayfield club and I am delighted to have him on board for next season."

Ben Calland, younger brother to head coach Matt Calland, joined the club ahead of the 2020 season from Oldham, and has also featured in scholarship schemes at both St Helens and Wigan Warriors as a youngster.

The centre scored four tries in as many appearances in 2020, including a hat-trick in the Challenge Cup victory over the British Army.

"I really enjoyed the short period of time we had together as a group this season," he said.

"The squad that is being built for 2021 is really impressive and it’s exciting to be a part of a team that will push hard for promotion."

Matt Calland added: "His attitude has been first class since signing with the club.

"He is very strong with ball in hand and is sound defensively.