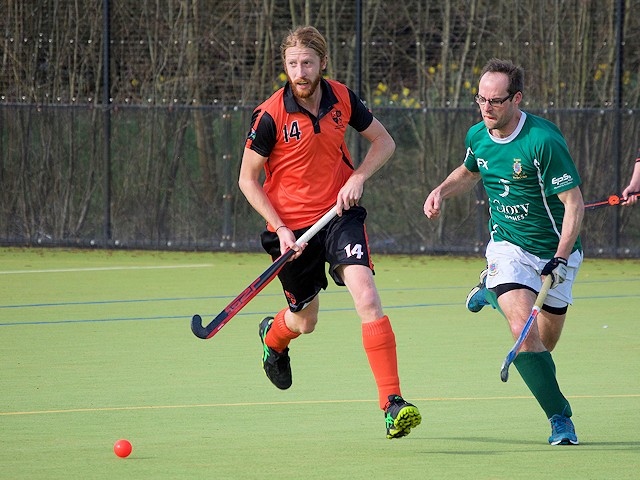 Saturday (29 August) saw a welcome return to actual hockey for Rochdale men’s first team away against Timperley in their first pre-season friendly.

A good knock about before the match proved useful as the Rochdale players hadn’t picked up a hockey stick for six months, let alone use one. Nevertheless the well drilled basics soon came back and with some good leadership from returning captain Michael Waddicor and newly elected vice-captain Danny Bowe the lads knew what to do.

With the match starting in ernest with all the correct safe guarding measures were in place, some decent hockey started to come from the Rochdale forward line. Riding the initial wave, the experienced midfield combination of Luke Rosebery, Jamie Shepherd and Michael Waddicor were soon dictating the play, allowing the forwards to make plenty of 23m and circle penetrations.

Clever positioning from deep allowed Sean Carney to link up with Rob Lees and Ricky Borritt, allowing them to make some devastating runs in dangerous positions; it wasn’t long before the opening goal came. Following some good link up play Ricky Borritt danced his way into the circle and though initially unsuccessful at getting past the keeper, he persisted and slotted it home to put Rochdale in the lead.

Against established clubs like Timperley it rarely proves to be one sided and today was going to be no exception. After using young legs to wear the defence down a bit, more experienced and skilful hands were brought over to Rochdale’s weaker side (the left in hockey) to try and make the breakthrough there. It did have some success in the first half as Timperley started to penetrate deeper into Rochdale’s half and did succeed in forcing a few penalty corners.

One of these proved to be a close call for Rochdale, as a well struck D top strike crashed into the post. Thankfully it was Luke Rosebery who acted the fastest, ensuring the ball was cleared as it rebounded out of the post. With some good leadership from centre backs Tim Liptrot and Danny Ramsbottom the problems were addressed and Rochdale ended a fairly even first half one in front.

Everything was still to play for at the start of the second half with the opening ten minutes proving crucial. Timperley started by returning the favour of passing to Rochdale instead of pushing back (as Rochdale had in the first, it being a friendly) and opted for a high press as soon as it was polite to do so. Sticking with the half time decision of retaining the formation, the central midfielders helped play the defence out of trouble with some good moves that allowed the forwards to get at Timperley’s defence.

Thankfully a goal wasn’t long in coming. Some brilliant efforts in the midfield from Peter Ransome and Ellis Barnes developed the play into a promising attack around the 23m line. Pouncing swiftly on the opportunity was Rob Lees who worked the ball into the circle before flicking it home to double Rochdale’s advantage.

The second goal took the wind out of Timperley’s sails a little bit but didn’t take the teeth out of their goal scoring threat, as instead of a high press they begin to sit deep and hit back at pace on the counter. A few times they did come close to scoring as they got behind the defence, but the back line held. With the experienced midfielders dropping back to assist the defence as people began to tire, Rochdale were able to spend large chunks of the second half camped at Timperley’s end.

Making use of his experience Jamie Shepherd used the tightly packed defence to his advantage, keeping the ball close to his stick and moving at pace he forced the defence to concede penalty corners on several occasions. Sadly these were not converted but one more goal was to be added to Rochdale’s total with Ricky Borritt combing a series of well worked one twos which ended with him putting a cool finish in to put the game to bed.

Overall it was a fairly even game but Rochdale proved to have more in front of goal and enjoyed more of the possession although Timperley did create some good chances. It was always going to be difficult coming back to playing after half a year with no hockey, so there was always likely to be a bit of rust.

On the whole though, Rochdale played a good standard and can look forward to getting better as games get underway again. There was no single man of the match this week, as everyone did well considering the circumstances.