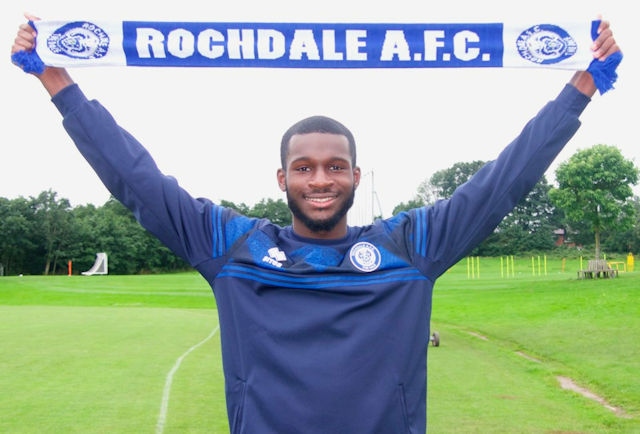 The move to the Crown Oil Arena sees him team up with fellow City loanee Gavin Bazunu, as well as his cousin Kwadwo Baah.

Amankwah, 19, has been with Manchester City since 2017 and featured in the EFL Trophy for their under-21 side last season, playing against Dale in the group stages of the competition, as well as in their game away at Bradford City.

He was in the stands as Rochdale took on Huddersfield Town in the Carabao Cup on Saturday, before completing his paperwork on Monday.

Amankwah commented: “I’m excited and I’m grateful for the opportunity – I’m looking forward to the season ahead.

“The game on Saturday showed how ambitious the squad are and the confidence that the gaffer is putting into the players, because there was so much belief going into the game.

“I heard about the move at the start of pre-season and once I found out it could happen, I knew right away that I wanted to come. I played against Rochdale last season and even although we won 2-0, I could see the style of play was very good.

“The gaffer likes to play football. He’s so demanding about how he wants us to play and that’s very exciting. It usually the bigger clubs in League One that like to play football, so for him to have that belief in us just shows how much belief he has in our ability.”

Manager Brian Barry-Murphy added: “I’m over the moon to bring him to our club. I have known Yeboah personally over a period of time, so I’ve had a keen interest in how his career has progressed. He is at a point now where he is ready for league football.

“He is a real tough individual who is determined to get to the top of the game and his pathway has been symbolic of that. He gives us something completely different in that area of the pitch. When we bring someone in, we want them to enhance the squad and he definitely does that. He is a key addition for us.

“We were caught short a lot of times last year in the particular area of the pitch, so he is a key addition for us. From last year’s experiences, this year’s fixture list is going to be even more congested.”