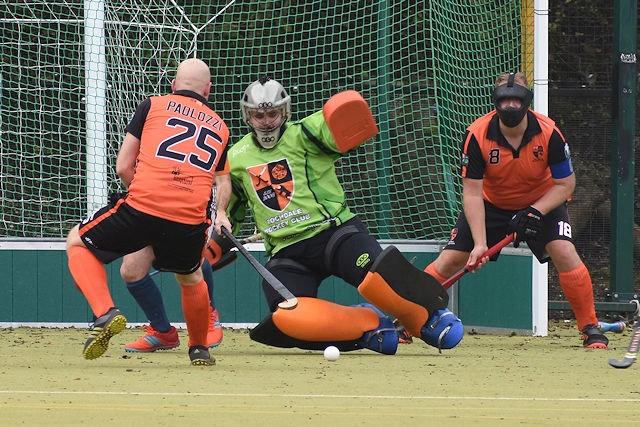 Rochdale Men's Second Team started their 2020/2021 pre-season campaign away with a win against a relatively youthful Wigan Second Team on Saturday 5 September.

Under new captain Adam Massey, Rochdale hoped to use this fixture as an opportunity to gain much needed pitch time for the players, with the North West Division 3 North section only two weeks away.

Both sides started slowly and Rochdale intended to keep their hockey simple with some free-flowing short passing and movement off the ball, to break down an equally energetic Wigan team. After some neat work of the ball in and around the Wigan ‘D’, Rochdale were gifted with a few short corner opportunities in quick succession to open the scoring.

Up stepped Sean Carney, his first reverse effort was saved only for the scramble to lead to another short corner. His second effort, which turned into an excellent reverse, hit pass to Tim Liptrot at the back post deflected his effort to goal, only for the ball to be cleared off the line. Rochdale sensed a goal was coming and after a half chance for Ellis Barnes, Rochdale were awarded a long corner.

It was the resulting corner where Rochdale fired their first goal into the back of the net.

After a quick long corner, Andy Meanock placed a weighted pass between two defenders for the young Ellis Barnes, who crossed to last year's star rookie Kane Morgan, who then swept a powerful shot from five yards over the keeper into the net: it was nothing less than what Rochdale deserved on the balance of play and Kane notched another goal to his hockey career.

It was now 1-0 with ten minutes on the clock and Rochdale felt they could get more, but it was Wigan who started on the front after conceding and pressed Rochdale higher up the field. The tactic started to show as the Rochdale players were unable to break out of their half and conceded some clear-cut chances from their own making.

Luckily, James Deacy brought his ‘A’ game on the day with a magnificent double save with his feet before palming a shot around the post. He certainly looked very much impenetrable in goal, just as he was last year with his impressive clean sheet tally in the league.

Rochdale looked to bench for some stability and on came Michael Bohanna to play in Midfield, pressing Wigan's most influential player around the pitch to prevent him from dictating the game further. When Adam Massey entered the fray, Rochdale changed the system to a half court press in an attempt to slow the Wigan threat and gain some composure on the current state of proceedings.

With the new adjustment, Wigan were only limited to playing across their back line trying to find the telling ball to open up the now defensive Rochdale line up. Then, under unfortunate circumstances, the game changed for Rochdale after one lapse in concentration saw Wigan break through, only for their dangerous Wigan player to slip in mid-shot and catch Graham Broadley's left eye with his stick, leaving a deep gash. He was unable to continue at this point and was ultimately taken to hospital to be checked out after some well-received first aid from the representatives in the Wigan camp. His replacement, Jamie Shepherd, came on as a makeshift right back and slowly Rochdale started to work their way into the game.

Rochdale were dealt another blow when a cross from wide right into the ‘D’ deflected of Captain Adam Massey's stick and hit the central defender Peter Rogers in the knee, resulting in a short corner and another man down for Rochdale. The game stopped for a few minutes whilst first aid was administered but Peter Rogers, unable to continue, limped off for the rest of the game to watch his team mates from the side lines.

Another change threw Rochdale out of rhythm and unforced errors created opportunities for Wigan. After more fine work between the sticks by James Deacy on numerous short corners at the end of the first half, Wigan could not find a break through. One could only describe the first half exploits as hockey’s very own rumble in the jungle, with Wigan as George Foreman - and there was more to come.

Second half didn’t start the way Rochdale intended to, as they were pinned back in the early stages with some of the younger players in the Wigan side starting to grow, each young forward fancying a chance for themselves to gain an earned equalizer. However, each effort was met with an confidently-agile James Deacy on continued form from the first half. Wigan started to commit more players forward, leaving themselves open to a Rochdale counter, where Adam Massey’s men could possibly extend their lead.

Rochdale changed to a more direct approach and after some quick interchanges down the left with Bjorne Braun, a quick switch to right wing found Rochdale through, Ellis Barnes set Sean Carney away, Carney skipped past his defender to feed Adam Massey who slotted home the second, 2-0 Rochdale. The goal knocked the stuffing out of Wigan and, not moments later, would concede another goal via some impressive counter attacking play by a resurgent Rochdale.

This time Kane Morgan managed to score his second of the match: he picked up the ball in ‘D’ from what proved to be another assist from the impressive Sean Carney, and then drove a unstoppable shot, hitting the back board.

The score line started to look a lot one-sided, until another injury occurred for Rochdale. The tireless Andy Meanock limped off after twisting his knee when attempting to initiate another break. Rochdale had to the shift the pack to compensate for the loss of another team mate.

Rochdale again were forced on the back foot and endured a spell weathering the Wigan storm. A goal became inevitable as chances were coming thick and fast. Then, finally, the break through Wigan had been working so hard for came when they found time and space in the ‘D’ to slot home after James Deacy's initial save. It was 3-1 and renewed some hope for the Wigan side.

The game opened up further as it started to turn into an end-to-end slug fest. Wigan probed and prodded to find another goal from consecutive short corners. Rochdale were still keen to relying on the countering approach from their 16-yard hit outs. The next goal was coming and Wigan would score the second from a scramble in the ‘D’ as a young Wigan forward would flick the ball into the net on his second attempt. It was game on: Wigan had seemingly found a way back in to the game.

The game suddenly swayed the other way within minutes as another Rochdale goal came to make it 4-2. Jamie Shepherd, who started to influence the Rochdale back line with Tim Liptrot, hit a glorious pass to the now lone striker Sean Carney, who managed to beat the defender to the ball and run through 1v1 with the goal keeper. Sean Carney picked his spot and drove the ball into the bottom left corner to cap an already fine performance on the day.

Wigan did find the net a third time after shear persistence from a Wigan forward, who wriggled his way through the Rochdale defence to hit possibly his 7th reverse stick shot on goal. James Deacy managed to get some of the ball but the shot proved too good, deflecting off his glove into the net.

The best move came last when Rochdale replied kindly a minute later. After some good work from the defensive line to play the ball out, Bjorne Braun skilfully danced through two players to play in Sean Carney hovering on the right to set up a 3v1 situation with Adam Massey and Kane Morgan for assistance.

Sean Carney assessed the situation and saw Kane Morgan who made a run to the front post, taking the defender away from the on-rushing Adam Massey at the top ‘D’. The captain finished off the move with a composed touch and shot, nutmegging the keeper. It was 5-3 from a third assist from Sean Carney, who looked like a contender for player of the match with James Deacy, who was ultimately named The Flying Horse Man of The Match.

The match ended shortly after with no notable moments as Rochdale contained any goal mouth threat to finish the game victors. It was an exciting first match in six months for Rochdale and the team's experience saw them through on the Saturday afternoon. Wigan will feel hard done by the result, but will be keen bounce back in their next fixture.

Adam Massey said: “With the uncertainty over the last few months, it was fantastic to see the team come together with such great spirit. In spite of the restrictions, we have recently been able to resume fitness training sessions.

“It has gone a long way to lifting team morale and the results were apparent in the game. We tried a few new tactics and although we have to do some more work to continue to improve, the result of the game showed promise and we are feeling positive going forward.”