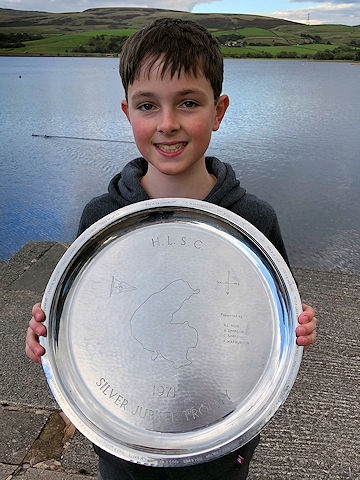 The lake’s young sailors came to the fore on Sunday (6 September) for the annual Founder’s Plate competition. In a closely fought contest, 12-year-old Jasper Bramwell was the winner.

There were other youngsters out too. Two three-year-old girls were sailing with their fathers in Mirrors. At the opposite age range, there was one 80-year-old helm sailing a GP14 single-handed.

In a pleasant north westerly wind, the Solo sailors scored best led by Martin Brennan, Mike Smith and Nick Hornsby. The higher performance boats did not do so well.

The second race, after a rain shower, saw the wind become more fickle in its later stages. This time, the faster boats got away while the wind stayed up so Stuart Bates (Phantom) was the winner, followed by Adam McGovern with 3years old Betsy in a Mirror and Martin and Rene Watts in a Merlin Rocket. Others suffered as the wind all but disappeared for a while.

The wind filled back in to give good racing for the final race. In a close finish, on handicap, the first six boats all crossed the line within a minute. The result was a win for Jasper Bramwell, runner-up spot Andy Carter (Solo) and third place Martin Brennan (Solo).