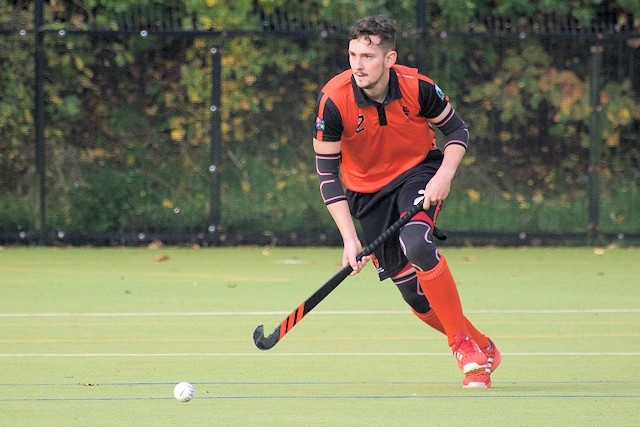 James Shepherd was the Flying Horse Man of the Match

Rochdale men's first team travelled to Warrington for their second pre-season friendly on Saturday (12 September), ahead of the season's scheduled start on 26 September.

Although Rochdale already had a game under their belts against more skilful opposition, it was to prove a tougher test, but a good five-goal affair with a last-minute winner.

The opening ten minutes of the game showed Rochdale were really going to have to dig in to get a favourable result and go up a few gears, as Warrington came at Rochdale in force with a high press, which contained most of the opening play deep in Rochdale territory.

This high press from Warrington made it difficult for Rochdale’s back line to find balls out from 16s and they started to concede a worrying number of penalty corners. Fortunately, either the dry conditions didn’t suit or Warrington hadn’t spent as much time on their set pieces, as only two penalty corners from four actually completed the initial pass, with only one of the remaining two finding a shot on target, which was well saved by Brian Robinson and cleared by the defence.

Warrington definitely created their better chances from open play, forcing Rochdale to put in some good challenges and interceptions as well as some good saves. They also rode their luck at times as Warrington struck the post only for it to rebound out. Rochdale’s defending was generally good, but it was fortunate that lady luck appeared to have her Rochdale shirt on.

It was never going to be all one-way traffic though and it wasn’t long before Rochdale showed their own quality going forward as the midfield started to find a way through. Spurred on by some near successes from penalty corners, Rochdale started to get some attacking moves at pace in behind the Warrington lines. The first half ended goal-less but Rochdale had started to grow in to the game by the end of it.

Warrington tried to start the second half as they had the first, but dropping deeper, Flying Horse Man of the Match James Shepherd deftly picked off one of Warrington’s attacks and hitting a 30-yard crossfield reverse stick pass unleashed Kieran Hunter with only one and the keeper to beat.

Kieran used his pace well, going past the defender on his weak side but stayed near D top. The keeper rushed out and slid in for the ball, but Kieran did a wide drag and calmly smashed it into the empty net for a well-taken goal.

It was not all that long before Warrington managed to reply. With Rochdale camped high as they were, attacking a turnover in possession allowed Warrington a counter of their own. The first phase of the attack was stopped by centre backs Luke Rosebury and Tim Liptrot, forcing Warrington to go backwards. Warrington retained possession however and brought more bodies up to support the attack. Rochdale tracked back well but the momentum was with Warrington. They cleverly identified a good attack point and went for it. A few quick passes later in the D and one of their forwards completed a relatively easy finish to equalise.

Warrington had been worth a goal, but Rochdale didn't give up so easily. Now Rochdale had started to find ways through the press and were starting to enjoy the lion’s share of the possession. Some good moves down the right, usually started by steadfast right back Danny Bowe, started to look threatening.

Rochdale were continuing to edge the quality of the play but Warrington were still proving a threat and an equaliser came their way again. A move down their right was cut back to the centre and into the D. There was a little bit of chaos but they retained possession and were forced to a wide position. The striker hit it quickly after being dragged wide, catching the keeper changing position got a bit of luck and the ball somehow snuck in.

Warrington had lost the edge their more youthful fitness had provided and Rochdale looked more like winning. With not long on the clock, Rochdale got a side line hit just inside Warrington’s half. Combining to create something from nothing, a perfectly weighted hit from Graham Broadley, with help from a dummy by Dave Gowers, found its way through three defenders to find Rob Lees slightly off centre on the edge of the D. Controlling it perfectly, he spun past his marker to find the baseline. He cut inside past a covering defender then rounded the keeper and, with well-disciplined composure, flicked it over the weak side shoulder of the man on the line to give him no chance.

With only two minutes left, there just wasn’t enough time for an equaliser for Warrington, so the match finished 3-2 in Rochdale’s favour. It was a challenging game, with Warrington’s press causing some problems early on but Rochdale battled through it.

Man of the Match this week was James Shepherd for tireless energy, a good assist and a well-disciplined performance.

Our Events listings averages over 40K searches each month. Submit the details to us online for your free listing.
Win a signed copy of Butcher Boy book