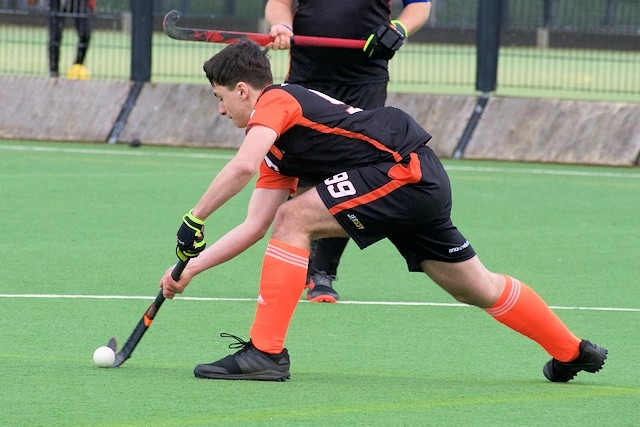 The intended friendly was changed at the last minute from Stockport's second team to a training match consisting a total of 80 minutes of game time with four drink breaks in-between, seeing Rochdale beat 8-0.

The game started evenly with trio Manny Ahmed, Bjorne Braun and Scott Hempsall Jones looking to impose themselves early with a few well-worked moves amongst each other. Kane Morgan playing a high line up front looked to make some intelligent moves but the final ball to him lacked the accuracy to carve open any sort of chance beyond the Stockport defence during the early stages.

Slowly Stockport moved up a gear and started to string more passes together, gradually moving up the field toward the Rochdale defence. With Adams Massey's team focused, Stockport were limited to playing around the channels, trying to find an opening into the ‘D’.

Liam Nutter retaining a well-earned place in the line up at left back and returning Richard Saggerson at right back kept the attacks fruitless with some good tracking and tackles aiding Rochdale to a few counter attacks. But it was a relatively a similar scenario at the other end, the final ball to Kane Morgan was missing, starving the striker of an opportunity.

Rochdale eventually fell behind to an unexpected goal when they were caught out by a quick free hit to an attacking Stockport forward who gracefully took the ball in his stride cutting in from the left, rifling a perfect shot into the top corner: it was 1-0 Stockport and Rochdale needed to reply.

Stockport were in no mood to relinquish the lead and shut out any threat in front of their defensive line. One-nil up and now brimming with confidence from the goal, the premier team looked to secure a second goal with some intricate play. Rochdale now pegged back, defending well for majority of the period against a fluid Stockport attack.

With the game’s first 20 minutes drawing to an end, a chance came when an opportunity was deflected toward goal - only for an alert Liam Nutter to pick the ball off the line and bravely usher away the threat with an opposing player.

Shortly after those heroics, Rochdale were ultimately to concede a second goal, through a similar move. Stockport, working the ball well around the ‘D’, managed to find room for a cross out wide to find the same player tap in from close range. The first 20 minutes finished shortly after, with Rochdale unable to find a way through to the final third of the pitch.

More changes were made in the next half, with Adam Massey looking to conserve energy under the warm weather conditions and allow players some well-needed pitch time.

James Trainor, making his first appearance in a hockey game, operated on the right wing and made a great impression early with his pace and intelligent runs. Fortunately for the Stockport keeper, he was still to be tested and James Deacy was getting more shot stopping practice at the other end, notably a brilliant close range save to flick the ball with his feet around the post.

Stockport’s persistence did manage to find two goals in similar fashion to the second, though the most interesting part of the training match happened when a green card was brandished for ongoing dissent, leaving the Stockport team with 10 players.

Rochdale started to use the one-man advantage and play the ball quickly down the channels with Bjorne Braun dancing his way through two midfielders. Rochdale were still not finding a way through the Stockport defence; the game started to slow down with too many stoppages in play, allowing Stockport to re-group nullifying the threat of a determined Rochdale side.

The third 20 minutes turned into a tactical affair for Rochdale, now deciding to sit back and play half court, frustrating the rampant Stockport team, now back to 11 men. With the team more compact, the contest in open play started to become more even, with Rochdale dealing with Stockport attacks collectively and breaking at each opportunity. But it was more of the same: their efforts were to be stopped with tactical fouls slowing any opportunity Rochdale looked to deploy.

Stockport started to make errors of their own when playing quickly across the back line, a few missed passes gifting Rochdale chances to move up the field. Still no break-through, the energy was there and some well-worked moves out defence though to midfield weren’t enough to penetrate the Stockport ‘D’.

Scott Hempsall Jones, now in eager mood, started to dictate some of the play drawing fouls as his trickery on the ball was starting to flourish, Bjorne Braun in similar mood, looking to receive the ball from a central position to dribble down the left channel on a few occasions.

Rochdale continued to look for another route through aerials over the Stockport midfield but to no avail. In a turn of events, the Stockport side managed to convert an attempt again when they quickly broke down a Rochdale defence to win a short corner. The well-worked set play was converted after it was slipped over to the left for a shot on goal, which trickled over the line after James Deacy's half save.

5-0 Stockport was soon to be 6-0 Stockport when a snap shot from the top of the ‘D’ toward goal was picked off in the air by the quick-reacting forward to deflect the effort into the net.

It was the last half and Rochdale decided to step up a gear with some direct hockey. The eventual ‘Flying Horse’ Man Of The Match, Ellis Barnes, now in his third position of the game as a left back, started to stretch the game down the left forcing his way past three players with success.

Manny Ahmed, looking to carry the ball, found the pacey Bjorne Braun, who drove the ball to James Trainor, only for his marker to slip and leave the young debutant flat-footed with the ball rolling to the base line, a close shave for Stockport.

Rochdale grew more potent on the break and the attitude didn’t stop when Stockport hit the seventh goal through another short corner routine. A first-time strike finding the back board via a Richard Saggerson stick wasn’t enough to discourage each Rochdale player. Rochdale were growing despite the score, more gaps started to become visible and the Third Division side looked to press for that one goal.

Working their way from the back through Tim Liptrot and Dave Marlow, both defenders started to win more of the ball back and initiate a quick breakout of defence, allowing an encouraging run from James Trainor down the middle.

Captain Adam Massey started to follow the play around, working in the free role ahead of the midfield to good affect, twice linking up successfully with Dean Close on the right. Kane Morgan, now playing in an unfavourable central midfield role, used his strength to hold the ball up for the easy lay off, a chance was coming and Rochdale looked in the mood to end the tie strongest.

The first half chance came from a Tim Liptrot ball deep to Bjorne Braun, who managed to get away from his marker, played a delightful long ball forward in the path of James Trainor just outside the ‘D’, with an equally eager Stockport keeper rushing out, causing enough of a distraction for the youngster to miss control, allowing the ball to roll out wide of the post.

Stockport managed another goal midway through the last half with another short corner; this time the first-time strike cleanly beating the keeper down to his left. With one of the last plays in the game, Rochdale created one last opportunity: a side line hit from Vice Captain Manny Ahmed found Captain Adam Massey in the ‘D’ but, with his back to goal, his turn and effort was well-blocked by the defender and cleared away.

The game ended 8-0 in favour of a more superior placed Stockport team, but each Rochdale player can hold their heads high as they managed a more even game in open play during the last 40 minutes. The training match was a welcome exercise for both sides ahead of the 2020/2021 season.

Captains Adam Massey said: "I couldn’t ask anymore from the lads. With the odds stacked so high against them from the get go, they refused to give up. Working hard, battling for every ball. while keeping their discipline to try out new tactics against such a strong side. They showed great character and team spirt to walk off the pitch with heads held high."

Rochdale hope to travel to a yet to-be-confirmed friendly against Brookfields on Saturday 19 September before the opening game of the season away to Bolton.