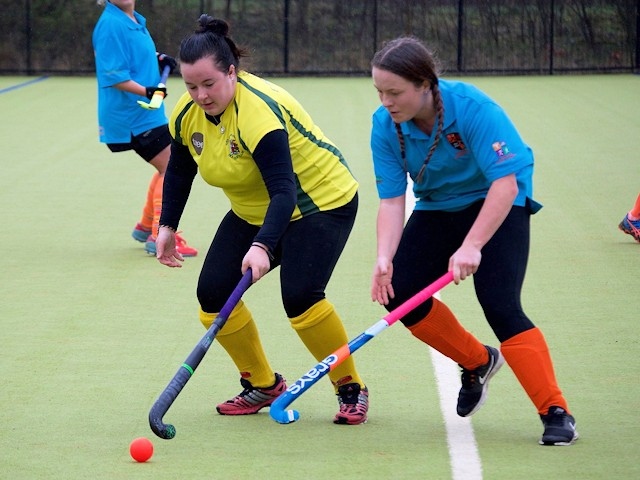 After their brilliant performance and effort last season, Rochdale Ladies were promoted into (Greater Manchester) Division 2. Now, after an uncertain summer with little opportunity to train as a team due to the Covid-19 pandemic they began their league campaign this weekend away against Urmston Ladies 2nds.

A series of unfortunate events (outside of Rochdale's control) meant that this was their first time playing a hockey match since the end of last season. They were raring to go with an attitude to match, but unfortunately it wasn't to be enough against a team that had had access to a pitch to train.

Once they had shaken the cobwebs off Rochdale were playing decently, with midfield and defence doing some excellent work holding Urmston outside any danger zone and occasionally managing to break through to their forwards to have a run towards goal. Urmston worked well to intercept and interfere with Rochdale's play, ready and willing to meet the ball before Rochdale, but each time Rochdale were just as determined to steal it back.

Rochdale's defence worked tirelessly to stave off multiple strikes at goal from a determined opposition, until Urmston were able to draw them out and split them up then took advantage of the space they'd created to get some goals.

At half time Rochdale were disappointed and frustrated but a quick (socially distanced) team talk reminding them that if they kept their heads and positions they all knew what they were doing - with a particularly rousing outburst from Gill Owen - had them back in the zone.

The second half saw a much better organised team, doubling down on the defence but able to open up play through the midfield and forwards when they got the ball. Urmston were still able to break through to increase their goal count. However, Rochdale were pushing back harder now, with some excellent work to weave, pass and drive the ball up the pitch and hold it in Urmston's defence for a couple of near misses on goal.

Urmston had seen an opportunity to start the season with a high goal difference, but Rochdale's defence worked well and blocked, tackled and intercepted each time to deny them multiple opportunities to do so in normal play. However, Urmston had their short corner technique down to a tee and despite some excellent work from the defence they were able to earn themselves another few goals using it.

Captains Pickering and Knowles said: "That was not the start of the season we wanted, but onwards and upwards. We played really well with 100% effort today."