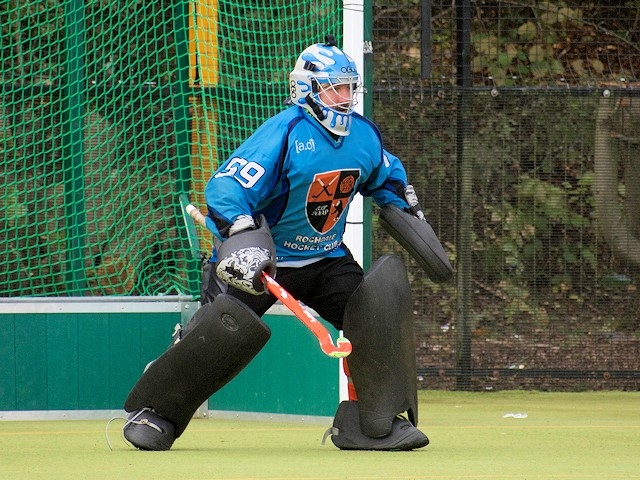 Rochdale Men's 1st team had their final friendly game before the start of the season on Saturday 26 September, against Warrington, who felt a little hard done by after the last minute 3-2 defeat at their place two weeks previously. With more pitch time under their belts since the last match, Rochdale made a better start than last time and enjoyed a good bit of possession with Warrington's press proving less effective now Rochdale had more confidence at the back.

Although the possession was fairly even, it was Warrington who were creating the better chances earlier on. These were coming from drawing the defense high and then breaking at pace and then trying to thread the ball through. Fortunately the final pass was usually well read and cut out, on the odd occasion it wasn't, sweeper keeper Brian Robinson was on hand to slide in and clear the danger.

The first goal from Warrington was to be created against a packed defence however, as dribbling at pace from the base line forced a penalty corner. With what looked like a well rehearsed move, the ball was injected to the top of the circle, switched to the right for a first time deflection back to the penalty spot for a first time slap hit into the corner of the backboard.

A little stung, Rochdale redoubled their efforts to get on the score sheet. The first sign of a goal was not long in coming as Dave Gowers made room for a powerful shot which flashed agonisingly wide of the post. Rochdale then started to earn a few penalty corners as they put the pressure on, but the equaliser was to come from a counter attack.

Warrington managed to break through the Rochdale line down the right, but were caught up and slowed down by Luke Rosebury. The cross did come through but was picked off by Graham Broadley, who cleared it to Ricky Borritt on the halfway line to set up a 3 on 3.

Driving at the defense, Borritt commited his man and slipped Kieran Hunter in behind. A quick 1-2 with Gowers gave him the shooting angle at the top of the circle, which allowed him to thrash it into the bottom corner.

Rochdale were back level but would end the half one down. With another penetrating attack, Warrington got in behind and into the circle. Robinson did manage to make a challenge but unfortunately the ball spilled through to open forward who wasted no time putting it into the open goal.

After a good team talk, Rochdale looked eager to get back level, as they largely maintained a high line. This largely forced Warrington to defend deep and risk conceding penalty corners. Rochdale's equaliser didn't come from a penalty corner however, but from determination and desire. A strong attack led by Gowers broke down into a scrappy affair, with Warrington simply unable to clear it. Gowers reactions were the sharpest, executing a quick hit that sent the ball goal wards, it looked like it was going in anyway but Hunter made sure to bring Rochdale level.

Tempers started to get a bit high as players started to tire and gaps in Warrington's press allowed some good attacks to develop. Some great chances came Rochdale's way, with some brilliant shots only being kept out by an equally brilliant 68-year-old goalkeeper who had a great game.

More fortunately for Rochdale, James Shepherd had kept himself on the pitch despite a heated midfield duel, which proved crucial in the last five minutes. Rochdale earned a penalty corner and Shepherd stepped up for a drag flick. He caught the defence out with a slow one that bounced awkwardly in the 'whose-is-it' zone between the post man and the keeper. It hit the backboard to put Rochdale 3-2 up with minutes to go.

Warrington were not finished however and were determined to get something, as they must have started to have feelings of deja vu. They forced a penalty corner of their own. The ball came D top, the striker created the room for a hit. Robinson got his stick to it and the ball looped up. Danny Bowe jumped in and calmly volleyed it towards the sideline, allowing Rochdale to see the game out and win 3-2 again.

It was a good game that again could of gone either way. On the whole it was a much better performance than last time and Rochdale are looking forward to starting the season.

The Flying Horse Man of the Match was Brian Robinson.