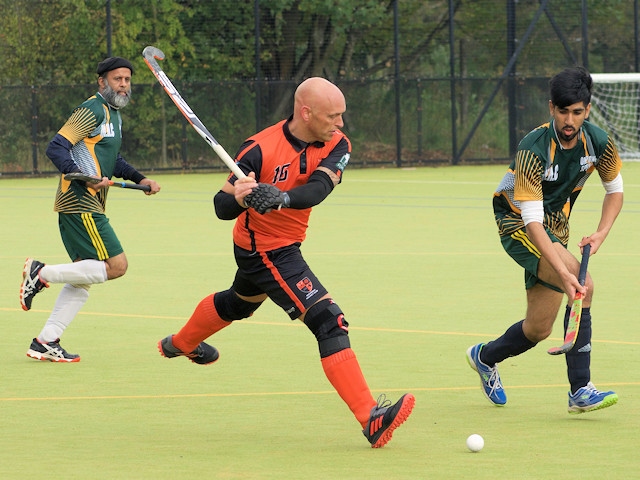 Dave Gowers was named man of the match

Rochdale Men's 1sts travelled to Kendal on a very rainy Saturday (3 October) for their first league match of the 2020-21 season. Kendal are a young fit side and had plenty of substitutes, but with a few pre-season friendlies under their belts, Rochdale were hungry to get something from the game.

Rochdale started the game with a five man midfield to try to get control of the match early on. This largely worked as Kendal were unable to press as high as they would have liked at the start. Both sides produced some early chances. Rochdale's shots forcing some good saves and Brian Robinson clearing up well at the other end when Kendal got through, with one effort being cleared off the line.

It would be Rochdale who opened the scoring from one of their well earned penalty corners. Opting for a switch to the right, the initial shot was saved but recycled for a second attempt which rebounded off the keeper only to be flicked in by the well placed and alert captain, Michael Waddicor. Kendal tried to get an equaliser but as the half wore on, the tireless efforts of Rochdale's midfield kept them in control of the match and would also lead to another goal.

With Kendal penned back in their own half, Rochdale's midfield played the ball around well and won a penalty corner. Waddicor slipped the ball to James Shepherd who slapped the ball goalwards, which was then deflected past the keeper by the Peter Ransome to double Rochdale's advantage shortly before the half time whistle.

Rochdale's defence of Danny Bowe, Danny Ramsbottom, Tim Liptrot and Graham Broadly had played a great first half, shutting down most of Kendal’s chances. The shots that did get through were cleared up expertly by keeper Robinson. The only bad news from the first half was that Rochdale players Shepherd and Hunter were injured during poor challenges from the Kendal players. Although Shepherd managed to play on in the second half after some treatment, Hunter's injury led to him being sidelined. His pace and skills would be missed in the second half.

It soon became evident that Kendal had changed their plan of attack at half-time, effectively sacrificing their right winger to create an overload on their left. Rochdale were still enjoying the majority of possession and some good tackling in the midfield, with Shepherd and Ransome making their presence felt, they largely kept Kendal at bay.

However, Kendal were looking dangerous when countering at pace, which is where their first goal came from. Breaking down their left the ball was played back to the centre near the top of the circle before being held up and rolled over to Kendal's right on the overlap. A good first time strike hammered the ball into the bottom corner and gave them a way back in.

Rochdale were still largely dominant but another Kendal counter attack forced a penalty corner. The set pieces were largely well defended by front runner Luke Rosebury but unfortunately Kendal kept enough composure to earn another penalty corner. Listening to the shouts of their defenders, Kendal switched the ball around the runners to their left and a good strike found the backboard to bring them back level.

Rochdale were a little stung with Kendal going back level and it wasn't too long before they converted their possession into a goal. A driving run down the right forced the ball to the baseline in Kendal's circle. The ball was played backwards and fighting for the ball in a crowd of bodies, Dave Gowers somehow got it, kept it, moved it to his reverse side before lashing it into the bottom corner to restore Rochdale's lead at 3-2 with 15 minutes to go.

Unfortunately there was to be another goal for Kendal, in controversial circumstances. A quick Kendal counter had earned them a long corner. Taking it quickly the Kendal player dangerously fired the ball past Michael Waddicor's shoulder before being deflected in. Rochdale's defence protested and the umpires conferred but it was deemed not dangerous by the Kendal local umpire, and the goal stood.

The game was a great watch for any neutral spectators and could have gone either way.

Captain Michael Waddicor said: “I was very happy with the lads, the performance was great considering the lack of pre-season training due to the current pandemic. We have a mixture of young lads and a few experienced players, and it was a great balance this weekend. It was the crafty veteran David Gowers that wins man of the match for me. He gave the Kendal defence a hard time with his physical stature, and was always closing them down.”

Next week is a home fixture to Kirkby Lonsdale Men's 1sts.

The Flying Horse Man of the Match was Dave Gowers.