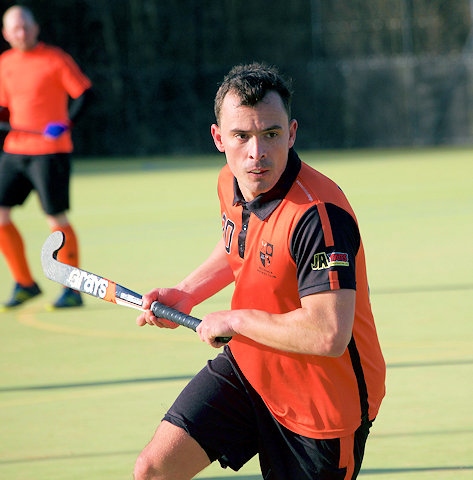 Rochdale Mens 2nds entertained last year’s Division 4 North League winners Kendal Mens 2nds on a wet afternoon for what proved to be a scintillating encounter between the two sides. Both teams had the luxury of coming into the fixture earning victories during last weekend’s league kick starter, with Rochdale particularly looking to avoid any early season upset against the lake district side if they were to push for promotion this season.

With captain Adam Massey sitting out the game due to injury and a host of players called up to play in the first team, Rochdale 2nds had to utilise the remaining squad of 15 to its full extent to ensure victory at Oulder Hill.

With Manny Ahmed stepping in as captain, Scott Hempsall-Jones returning from a two-week absence and Mohammed Shakir making his debut for the blazing squad, it was relatively a strong line up for the home team.

The game started at a slow pace for both sides as Rochdale set up with a half press and Kendal played the ball across the back line in front of the promotion chasing home side. Rochdale stayed compact during the first few moments and the young Kendal side were looking to find gaps to exploit, but their first forward pass was intercepted by Bjorne Brauns and Rochdale broke in numbers and at pace.

The South African carried the ball forward, releasing an energetic Kane Morgan and creating time and space for him to manoeuvre down the channels. With Rochdale now pressing and passing the ball around with devasting effect, a chance was imminent. The first chance came when Andy Meanock and Sham Ahmed in midfield played Dean Close out wide, but his cross eluded the forward line for a 16-yard hit.

Kendal had some joy bringing the ball out from the 16-yard set plays with pin point aerial balls to the forwards, but with last week's impressive defensive display from the home side, the back line continued to be a dominant force preventing any Kendal attacks from reaching the home team's ‘D’.

Rochdale started to find more composure on the ball after being drawn into a scrappy affair in the middle and soon found their rhythm again with Brauns and Hempsall-Jones heavily involved during each wave of attack. A quick break down the left channel saw Hempsall-Jones sweep a first-time pass directly into the path of Brauns who passed the defender and rifled an unstoppable shot close range for Rochdale to go 1-0 up.

With Rochdale reverting to a compacted half press, they looked to break on the counter, firstly Meanock breaking up a Kendal attack to set Rochdale away to a second chance. His delightful ball found Close who drove down the right wing leading to some fine link up play with Morgan, Sham Ahmed and Brauns outside the Kendal 25-yard area. An exquisite through ball saw Hempsall-Jones one on one with the goal keeper, but his attempted flick was easily palmed away squandering a golden opportunity to extend the lead.

As Kendal were offering little going forward, the momentum was with Rochdale and it wasn’t long before Hempsall-Jones redeemed himself for the earlier miss. After some good work between match captain Manny Ahmed and Sham Ahmed, the latter found Close, whose cross found Hempsall-Jones on the base line, his drive inside the ‘D’ skipping through three defenders and the goalkeeper resulting in a second Rochdale goal.

It was very much well deserved as the passing game under the difficult wet conditions was spectacular for most of the half.

Rochdale continued in similar fashion, but Kendal also started to push back looking to find a goal before half time. The Cumbrian side managed a few glimpses on goal with consecutive short corners but James Deacy and the defensive four of Richard Saggerson, Liam Nutter, Peter Rogers and Dave Marlow stood firm to clear away on each occasion.

At the other end Rochdale were probing for more goals with Morgan drawing a fine save from the young keeper. Rochdale were making changes to conserve energy and utilise all 15 players, the tactics were to mark tight and preserve the lead. The half ended 2-0 with Rochdale unable to extend the lead further with two notable chances, one from Shakir and the other from a short corner routine. But Rochdale were flying and were unfortunate not to be 5 or 6 goals up.

After a constructive team talk from the home team, they picked up were they left off in search of a third goal. Last week's man of the match Meanock was growing in influence with every burst forward and finding more threatening positions leading to chance after chance for Rochdale and his performance was becoming more than Kendal could handle.

For long patches of the second half, the chemistry amongst the squad was astounding, with every attack involving him. Twice finding Morgan, who will be disappointed with his first effort as he turned a flat-footed defender to shoot on goal, but the shot was not crisply struck and was straight at the keeper. His second effort created a short corner for the home side. A slip to Brauns, who swept a pass to the back post was almost put away by Hempsall-Jones, but a point blank save from the young keeper denied the forward.

It wasn’t long before Rochdale extended their lead in mesmerizing counter attacking fashion. After a spell defending, Marlow played a weighted pass to Close on the right channel to set off a counter attack which finished with Meanock and captain Manny Ahmed combining with three one-twos to beat each opposition player through the middle and Meanock finishing the move with a top ‘D’ strike into the net. It was a well taken goal from excellently orchestrated move.

Kendal started to wake up more, taking risks going forward by overloading their front line. With the game now more open, it started to become more end to end resulting in very close chances for each team. Kendal were guilty of missing the closer of the chances as a few aerial balls into the Rochdale half saw shots fired at keeper Deacy's net. The home side keeper had to be alert on a few occasions, one particular save with his feet being the best save of the day.

Rochdale reverted to defending in numbers against the most common threat Kendal had to offer down the right channel and aerial balls.

Midway through the second half, with the relentless approach from either side to score, both goalkeepers were called into action but the score still remained 3-0.

As more changes were made the game started to slow down with Rochdale thinking more about game management but Kendal were forcibly looking to find a way through a stubborn defence overloading down the right channel at every opportunity. Liam Nutter who had defended admirably throughout the game was still looking impenetrable against a very skilful player. Slowly the tide shifted back into Rochdale’s favour as they found another breakthrough, Michael Bohanna involved with breaking up play, combining with Meanock who deservedly was awarded man of the match (for the second week running) to initiate another home team onslaught.

Meanock found himself hurdling the ball over two attempted tackles in the middle, delivered a through ball to Brauns, who waltzed his way through the defence on the left channel. His lifted cross shot at the end of the move was picked out with a cover drive swing by Morgan to register his first goal of the season.

Kendal still didn’t lie down even after the goal, showing why they were promoted from the fourth division, they still pressed ahead admirably for opportunities. The young side finally broke the Rochdale resistance when they played the ball all the way to the base line, the young right winger squeezed past the entire defence to score their first goal.

A second goal was scored during a short corner in the later stages to make it 4-2 with sheer luck, a miss hit trickled all the way from the top ‘D’ into the net.

Rochdale finding their lead cut down to two brought on more substitutes to finish the game more strongly and they were very unfortunate to not score more goals in the last stage, so the game ended 4-2.

The Flying Horse Man of the Match was Andy Meanock.