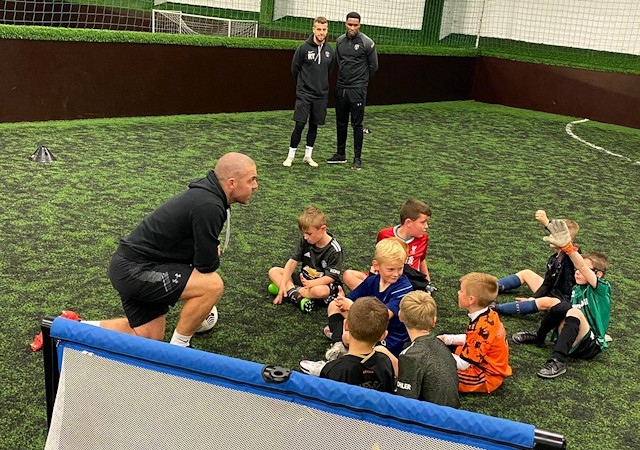 Stephen Dawson (foreground), Richard Tracz (back left) and Kelvin Etuhu (back right) have been coaching children locally at the R-Kikx Academy

Local junior football club, R Kix Academy, has enlisted the help of three professional footballers with over 1,100 senior career appearances between them to help with the development of 250 young players across the borough.

Stephen Dawson who played for the Dale during the 2014/15 season joins current League 2 professional Chris Taylor, along with former Manchester City player Kelvin Etuhu, in helping the club to improve and develop its young players from tots to under 13s.

Richard Tracz, head coach of R-Kikx Manchester, said: “Stephen and Chris both hold UEFA A licenses whilst Kelvin, who will be heading our academy, has played in the Premier League. All have had distinguished careers and are passionate about giving something back. Their experience and knowledge of the game will be invaluable for the continued development of the children and I am really grateful to them for giving up their time.”

Kelvin might be remembered locally for scoring the equaliser in his debut for Rochdale against Wycombe whilst on loan in 2007 but his spell at Spotland was cut short due to a knee injury prompting his return to Manchester City.

Ex Dale player, Stephen Dawson, who also played for Leicester City and Barnsley, said: “It is great that I can play a small part in helping such a fantastic bunch of boys and girls on their football journey and I am delighted to help out with the R Kix family.”

The club‘s academy teams play on Saturdays in the Manchester Youth Super League whilst the grassroots teams compete on Sundays in the Heywood Junior League with 32 children currently also training with professional clubs as part of their development.