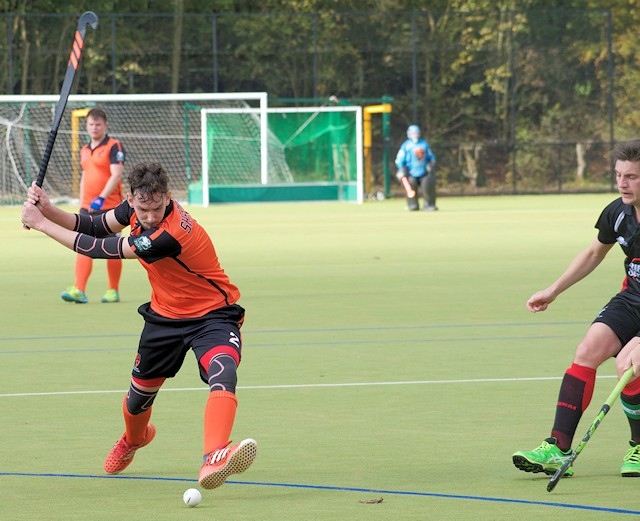 Rochdale Men's 1st team played their first home game of the season against Kirby Lonsdale on Saturday 10 October. With a healthy amount of substitutes to provide more legs and better weather, Rochdale were hoping for their first win of the campaign.

Rochdale opted to choose ends so as to have the sun behind them in the second half, which meant Kirby Lonsdale had the first push back. Kirby Lonsdale did come at Rochdale a little to start with but it would be the home side that had more possession.

The first goal was to come a little against the run of play. Rochdale were enjoying possession high in the Lonsdale half, but were caught out as a good tackle, followed by a big hit led to a 2 on 2 in the Rochdale half. Attacking directly the Lonsdale forward got goalside of the defender at D top and committed the keeper. He slipped the ball to the baseline to his teammate who managed to dribble the ball into the open goal as the last defender slid in. There was a suspicion of the use of the back of his stick but the goal stood.

Conceding so early, against the run of play could have dispirited Rochdale but they played smarter instead. Jamie Shepherd dropped in to screen the back line more, while the home side's orange shirts pressed for an equaliser.

It wasn't too long in coming as some probing play started to get Rochdale in the opposition circle. Captain Michael Waddicor was fastest to react to a loose ball that was half cleared by the Kirby defence. He ran directly at the defender, beating him for pace by driving around the byline and past the player. He then played a pass in to Kieran Hunter on the inside post, who deflected the ball out to the P spot for the on rushing David Gowers to volley the ball into the back of the net for his second goal of the season.

The rest of the half was largely even in terms of chances created, however it was Kirby that seemed to be getting the clearer chances when their forwards continuously found space away from the Rochdale defence.

The first half ended 1-1 and during half time Rochdale decided to make some changes in defence. The introduction of Rick Borritt and Luke Rosebury in defence gave a much needed rest to strong tackler Tim Liptrot and big hitter Graham Broadley who had both been working hard since the start of the game.

This looked like a good move from the moment it was initiated as Lonsdale struggled to get past the fresh legs in defence and the ever reliable duo Daniel Bowe and Danny Ramsbottom. Kirby were left with their option being to commit men to attack and try to get a second goal but with more men forward it led to them being weaker at the back. This allowed Rochdale to create more opportunities as they started to earn some penalty corners.

A goal was soon to follow as one of these was converted. The injection came D top and was switched right, a hard shot followed and rebounded off the prone goalkeeper, allowing captain Waddicor to pin point a slap shot into the corner of the net, adding to his tally from last week.

The match was still not over, as Kirby Lonsdale are a capable side and still managed some good attacks but Rochdale held firm and doubled their advantage not long after.

A quick Rochdale counter down the left from Hunter, forced Kirby back into the circle. An initial shot was cleared off the line, but this bobbled out to the top of the D where the well placed Rob Lees was waiting. He struck it sweetly first time and hammered it into the bottom corner to put Rochdale two ahead.

The game wasn't quite won, but Rochdale held firm and looked more likely to add to their tally than conceding.

After the game, Rochdale captain Michael Waddicor said: "Today was a great result. The lads never gave up, and continued to chase every ball down when we lost possession.

"Several players could have won this week’s man of the man, including Peter Ransome whose tireless efforts were only beaten by James Shepherd who did a great job securing the defence and breaking the opposition play down.

"The promotion of several young lads from the second team (including young prospect Ellis Barnes) has now given the first team some depth, which has been missing in recent years. With some senior players still to come back from injuries, it could be an exciting time for the club."

The Flying Horse Man of the Match was James Shepherd.

If you're looking for work or for a new challenge search our local job vacancies. Updated daily, by employers and recruitment agencies.
Win a signed copy of Butcher Boy book