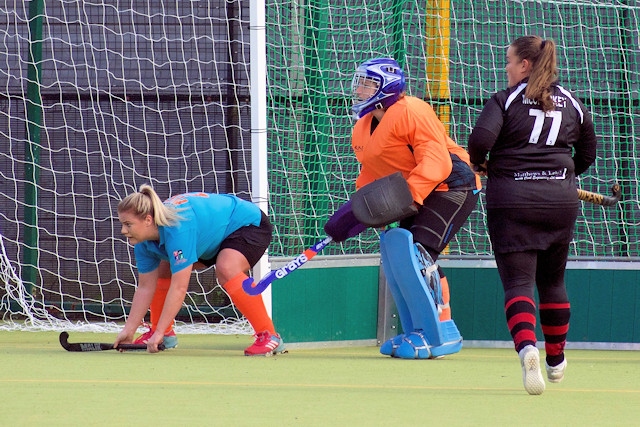 Keeper Sam Partington was named player of the match

Rochdale Ladies were away to Bolton Ladies 2nds on Saturday 10 October and apart from a couple of brief rain showers at the start of play, the weather was favourable.

Rochdale were feeling upbeat at the start of the game, their performance over the last couple of weeks showing a wonderful improvement on their start to the season. Having learnt some lessons from their new strategy for handling substitutions throughout the game (thanks to Jennie Ransome keeping things co-ordinated!) they were ready to see further improvements and even more eager for their first win.

Despite the speed of some of the Bolton attackers Rochdale's defence dug in and tracked them well, with special mentions to Collinson and Brammer who covered their areas spectacularly. Eventually the defence provided enough of a gap to allow the midfield to drive forward and weave their way up to Bolton's D. Leech took a shot on goal as the Bolton keeper left the back line to close her down and, deflecting off the keeper, the ball arced through the air long enough to give Rochdale hope before it landed just to the far side of the goal.

Bolton were just as determined and managed to break back through into Rochdale's defence, but through a combination of strong defending and some excellent saves by Partington they were denied. After a couple free hits that were non-starters, Rochdale were able to find a gap in midfield, with Hodcroft and Pickering working the ball well around the opposition to pass it off to Banks. She ran it into the D and dragged it right before attempting to shoot to the far corner - only to be denied by another superb save by the Bolton keeper.

The ball finding a Rochdale foot in their D gave Bolton another short corner - their first had been fruitless due to some quality Rochdale defending - and despite a great effort from Rochdale's defence they were able to slot it down the post. However, moments later it was declared disallowed as it wasn't taken out of the D before Bolton attempted to score.

At half time, spirits were high. Rochdale were playing brilliantly and had given themselves multiple chances on goal whilst defending their own end well.

After another attempt by Bolton to break through Rochdale's defence was seen off, Leech was able to drive the ball down the wing, doing some excellent one-twos with Ransome in Bolton's defence to get the ball into the D and launching it to the far corner, unfortunately just wide of the goal again.

Roughly halfway through the second half Bolton were finally able to find a crack in Rochdale's defence, and took advantage to land themselves a goal.

A short corner in Rochdale's favour gave them a chance to level the score, but the ball was saved by a great effort from Bolton's keeper. As it rebounded, one of Bolton's defenders stopped the ball with her foot before kicking it off the back line, resulting in a penalty flick for Rochdale. Leech stepped up to take it, and launched the ball top left, but the Bolton keeper got a glove to it and saved it.

Despite having barely ten minutes left to play Rochdale were still determined to get themselves that elusive goal. A free hit from Knowles found its way to Banks in the centre of the pitch, who found a sudden burst of speed and drove it down the pitch and around the Bolton players who attempted to stop her. She made her usual feint shorter and tweaked it around the keeper into the far corner to get herself a goal.

With the score even again Bolton attempted to regain their lead, their players pushing deep into Rochdale's defence, however Moon and Brammer worked well to hold them back, with some excellent covering by Collinson before the ball was finally cleared by Mongan.

Both teams kept pushing until the final whistle in a valiant effort to get another goal to bring the game out of a draw - with Leech running down the left wing like a demon for another attempt - but it wasn't to be.

The final score was 1-1, with Rochdale's goal scorer Jenny Banks.