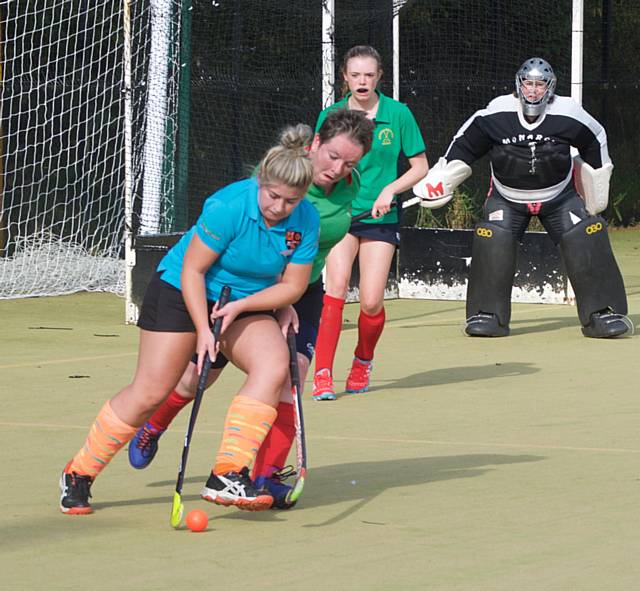 Rochdale Ladies were away at Bury Ladies 2nds on Saturday 17 October, on a cool but thankfully dry afternoon.

Despite the unusually late start time Rochdale were feeling confident about their chances. Their recent results were on an upward trend and they were itching to get their first win. They were sticking with their new strategy of rotating their substitutions throughout the game now that they had a feel for how it worked.

Rochdale started strong, their whole team working well to intercept Bury and knock play back into Bury's defence, however despite some quality saves from Partington and great defensive work from Rochdale's whole team covering and tackling the opposition Bury were able to get two relatively early goals.

Rochdale didn't go down that easily. They pushed back with spirit and gave themselves plenty of chances in Bury's defence, working up and down the pitch well to keep play out of their own half for significant portions of play. One such effort down the wing saw Hodcroft make use of her reverse sweep with a great cross through the D but it was blocked by the Bury defence.

Moon stopped another Bury attack just outside of Rochdale's D, quickly working the ball free of Bury's player and tapped it to Knowles who drove it up to the centre of the pitch and bounced it over an opposition's stick to find Banks. Banks ran down the remainder of the pitch, sidestepping the single defender in her way, and as she entered the D she took her shot and scored Rochdale's first goal.

Determined to even the score, when Pickering claimed the ball she drove it down the pitch and passed it off to Banks just outside the D. Banks feinted to her right to open up the space to cross it across to the back post. The ball sailed just wide of the goal and unfortunately no one was there to nudge it into the goal.

Just before half time a short corner gave Bury a chance to get a third goal, but Rochdale defended too well and denied them.

Shortly into the second half and a free hit deep into Bury's defence was not a chance Rochdale were going to waste. Pickering passed it to Knowles who tapped it back to Pickering after she ran around the defender and they were in the D. Pickering took a shot on goal only for Bury to stop it, but Hodcroft was ready for the deflection and crossed it to the far post where Burrell was ready to pick it up and slip it into the goal before Bury could tackle her.

With the score even at 2-2, both teams were working their socks off to pull into the lead. Rochdale worked hard - with Pickering and Hodcroft doing some excellent one-twos down the wing - to give themselves multiple chances in the D. Banks, Leech and Hodcroft took plenty of shots in the D but unfortunately Bury's defence was strong enough to deny them. Moon made her debut up front towards the end of the match and was unperturbed by Bury's attempts to tackle her, but unfortunately wasn't able to break through them.

Despite some excellent work by Rochdale's defence - Collinson was covering ground and players with precision, Brammer and Mongan were efficiently intercepting Bury and passing the ball back off the midfield, and Owen was an unshakable wall at the top of the D - Bury were able to get lucky and finally slip a shot through and increase the score in their favour.

Afterthe game, captains Knowles and Pickering said: “Today's game was a brilliant display of determination and skill. Each week we are improving; the only way is up.”