You are Here: Home » News » Sport News » Brown heads back to the stages with popular Nissan Kit Car

Brown heads back to the stages with popular Nissan Kit Car 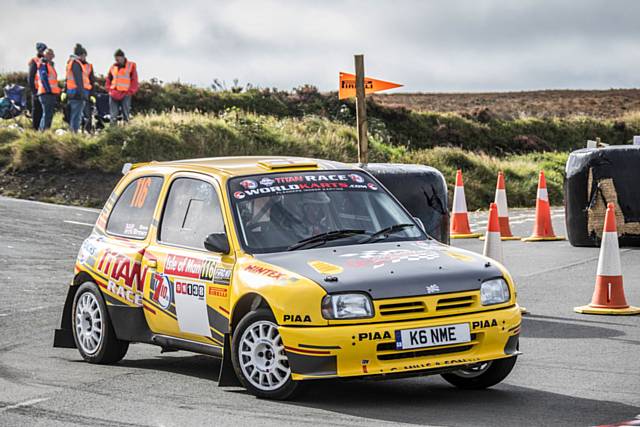 Brown in action in the Micra

The South West event will mark the 12-month anniversary since Brown has competed in a stage rally, and the South West based event will be the pre-cursor to the opening round of the Motorsport News Circuit Rally Championship at Oulton Park the week after, which he has also entered.

Brown enjoyed a busy and successful season of Rallycross in 2019, taking a podium place in the Toyo Tyres British Rallycross Championship BMW MINI series but his last stage event sadly ended in retirement in Belgium behind the wheel of a MINI Cooper last October.

However, his passion for stage events meant the plan would be to return to rallying in 2020, but the Covid-19 pandemic halted most events in the UK and Europe, leaving him on the sidelines. A one-off outing in a Historic Ford Mustang gave him his racing circuit debut in September, but Brown would always have his sights set on a return to the Nissan Micra which had enjoyed a pre-season rebuild in the down-time.

With many rally championships being forced into cancellation and many Belgian events also on the sidelines, he had eyed the MSN Circuit series as a viable alternative, lodging an entry to the opening round in November. Well aware that heading straight into his first rally for 12 months would be a steep learning curve, he elected to contest the Cirencester based event with regular co-driver Paul Stringer returning to the passenger seat of the Nissan.

Whilst the single-venue airfield event is a far cry from the closed public roads of Belgium that Brown has been used to in the past, the 42-mile asphalt rally should provide a suitable shakedown for the following weekend’s Championship opener.

“I hope I remember how to do this,” said Brown.

“It’s been far too long since I have competed in a rally and although I`ve enjoyed my outings in Rallycross and circuit racing, my heart and passion lie on the stages and of course in the Nissan. We have been waiting patiently for an event to do and of course, at the moment the current guidelines have meant many rallies cannot run which is understandable. Of course, it’s not quite the roads of Belgium but we are just really grateful to be able to compete right now.”

The Cotswolds Stages Rally takes place entirely on a disused airfield and has attracted a full entry, but the more forgiving nature of the venue will allow Brown to settle back into the Nissan.

“I started my rallying career on airfield events like this so it's nothing new, but there is no pressure at all which means we can concentrate on making sure the car is right before we head to Oulton Park the following week. The MSN Championship is the only series left to run in 2020 so it made sense that we try and do that this year. It’s a rally, based at a circuit so it should suit me really, I've got no excuses after my racing outing last month! But let's get the first weekend out the way first and see how we get on. We have made a few changes to the Micra over the closed season that need testing properly, but I`m delighted to be back.”