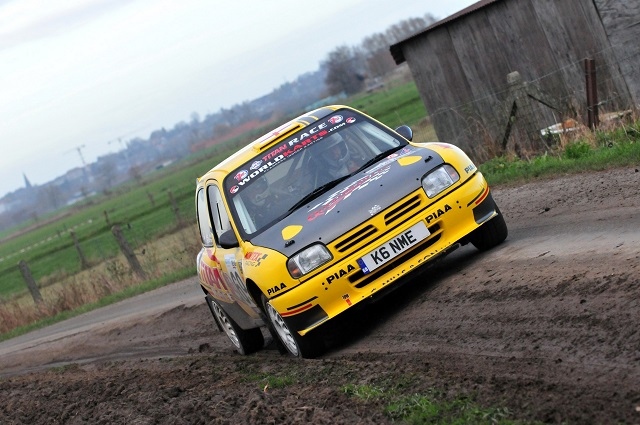 Steve Brown heads to Donington for the Dukeries Rally this weekend

Rochdale based rally driver Steve Brown will contest the first stage event to take place after the latest lockdown this Sunday (6 December), as he tackles the Dukeries Rally at Donington Park Race Circuit in his familiar Nissan Micra Kit Car.

The opening round of the Motorsport News Circuit Rally Championship has attracted a capacity entry, with over 100 cars set to tackle the popular event, with Brown’s Nissan contesting the event at number 70 seed, such is the quality of the field.

With regular co-driver Paul Stringer alongside, the duo will aim to capitalise on their Cotswolds Stages Rally class podium, achieved last month in Gloucestershire as a warm-up to the MSN Circuit series which was eventually put on hold due to the Covid-19 pandemic.

Brown has had a quiet season behind the wheel, as have many thanks to events being cancelled or postponed in 2020. He was fortunate to try his hand at circuit racing in a historic Ford Mustang, coincidentally at Donington Park in September, but has always had his eye on returning to the stages in the potent Micra.

With limited options available and his plan to head into Belgium once again put on hold, Brown elected to contest selected events in the UK, and having been out of the driving seat of the Nissan for over two years, used the Down Ampney event to re-acclimatise himself to the machine.

After some first stage technical issues were ironed out, Brown enjoyed a top twenty result and was ready to head straight into the MSN Circuit opener the week after. Sadly that was postponed, but he kept his entry to the Dukeries Rally this weekend and will head back out onto the stages once again.

“I’m really excited to be competing again this weekend, I think its very fortunate that we are able to still be out there contesting events and that’s thanks to the protocols that the governing body and motor clubs have put in place” says Brown.

“It’s not my usual style of event that’s for sure, and competing at a circuit in a rally will feel a little odd but Down Ampney certainly gave me an indication of just how good the Micra is after the work we have carried out over the last year or so and it will be interesting to see how it goes.”

With a high calibre entry list and a lower than usual start number, Brown is focusing more on the experience than an outright result.

“It’s a mega entry and there is a very high chance we will be catching cars during the day so I`m not going concentrate on outright results too much. Another class podium will be nice but as I say, I`m just pleased to be out there competing. The rally uses both the circuit and a lot of the perimeter roads and paddock, so my racing outing here a few months ago probably won’t help too much either. That said, it should be a good day and it will be great to push the limits of the car a little more.”