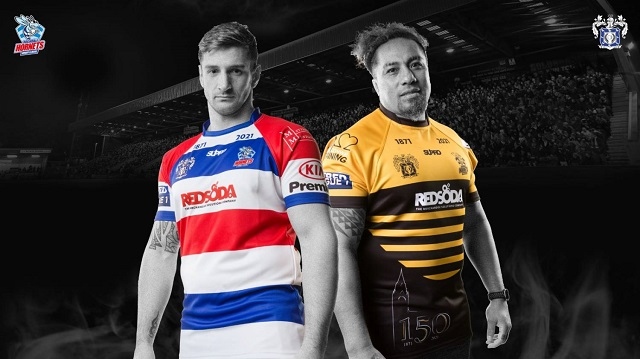 The new home and away shirts for the 2021 season

The new Rochdale Hornets kit for the 2021 season has been revealed by the club and is now on sale to supporters.

The home shirt features the bold hoops and red sleeves are inspired by the 1921-22 Challenge Cup shirt worn by captain Jack Bennett, with hoops being worn by the club for much of its 150 year history, having lifted silverware in hoops in 1922 and 2013.

The new red and blue colours have been refreshed as part of a brand restyle in a new partnership with Supro Sports.

The 150th anniversary crest, which launched last month, can be seen on the right breast.

Hornets have used several versions of the town and borough crest, paying homage to the cotton and iron industries of the past.

Amber and black, the original colours of the club in 1871, have formed the main inspiration for the 2021 away shirt.

There are thin hoops which scoop into a U-shape on the front and back which represents the body of the hornet.

The bold amber and black colour was last present on the 2016 change jersey, which the club wore in the League 1 Grand Final victory over Toulouse Olympique.

Rochdale is well known for its town hall, which has been included in the shirt design as the club and the Grade-I listed building share the same birth year of 1871.

In 1871, after Rochdale Juniors and Rakebank merged to form Rochdale United, the directors of Rochdale Wasps, Rochdale United and Rochdale Football Club met at the Roebuck Hotel in the town centre and created Rochdale Hornets to represent the town.

Red Soda will once again be the main shirt sponsor in 2021.

Both home and away shirts can be bought via the new online store: