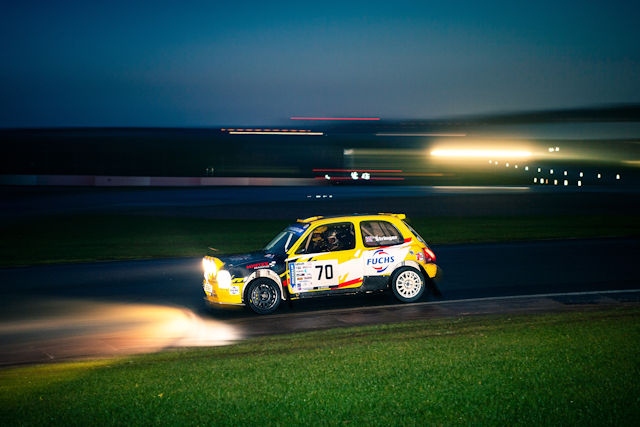 Nissan Micra Kit Car ace Steve Brown rounded out a quieter than normal season with third in class at the Dukeries Rally, which took place at Donington Park Race Circuit on Sunday (6 December).

Acting as the opening round of the winter-based Motorsport News Circuit Rally Championship, a bumper entry saw a healthy battle for Class 1 honours, with Rochdale based Brown and regular co-driver Paul Stringer overcoming several hurdles throughout the day to take the final class podium spot and 60th overall at the damp Leicestershire venue.

With Covid-19 impacting the motorsport calendar in the UK and Europe like many, Brown has sat out much of the season, managing selected outings during the year but falling short of completing a full championship.

Original plans to head back to Belgium put on hold and a freshly revitalised Nissan Micra ready to go, Brown was pleased to be able to contest the Cotswolds Stages Rally last month, grabbing a class podium in the process.

With the MSN Circuit series taking place in the 'closed season', and the only rally series to survive the pandemic, Brown elected to head to Donington in a bid to further reacclimatise himself to the machine after two years away from the driving seat of the Nissan.

Over 100 entries headed to a cold and damp circuit to tackle 48 miles of special stages, utilising the perimeter roads, car parks and the race circuit itself throughout the day. Conditions were treacherous during the morning loop of stages and with temperatures failing to rise much above freezing, it would be a tentative start to the day for Brown.

A misted windscreen would prevent an early charge on the opening stage of the event, leaving him down in fifth in class. The second stage wouldn’t bring much more luck for the Micra driver, a spin in the slippery conditions further hampering any progress up the leader board.

As Brown’s confidence improved during the day, his fightback began and with only six special tests to improve on his position he would have to lay down an impressive marker of times to creep into the podium positions. By the fifth test, Brown had grabbed third in class and an all-important buffer to fourth made even more valuable thanks to suffering a damaged gearbox on the final stage of the rally.

Limping across the line of the final test, Brown had built enough of a gap to fourth to be able to secure the final class podium on what is set to be his final outing of the year.

“It was a trying day, but I`m really pleased with the stages that we managed to do cleanly and it shows that the Micra certainly has the potential for the future,” remarked Brown.

“I was a little disappointed with third if I`m honest, but with the issues we had in the morning and the fact that the car is not quite suited to the venue, it’s not a bad outcome and its nice to come away with some silverware to end the year.

"It’s been a very hard year for everyone so I`d especially like to thank my partners and everyone who has stuck by me throughout the season. We are certainly hoping 2021 will be much better and we can get back to some kind of championship assault and show what we can really do.”