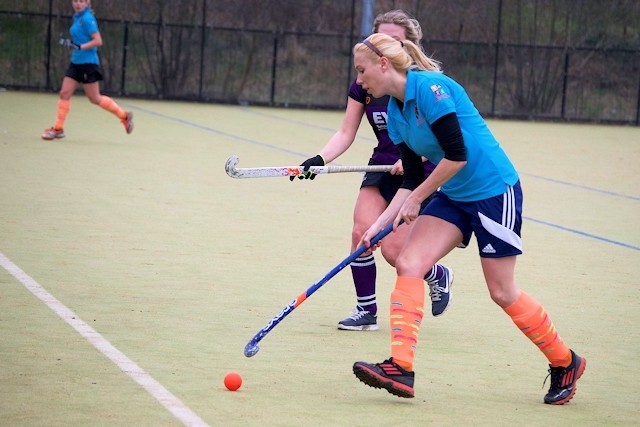 Player of the match was Gemma Hodcroft

This week Rochdale travelled into Manchester to play current top of the league, Didsbury Northern Ladies 5ths, for their last match before the festive break. The weather just about stayed dry for the match on Saturday 12 December.

Just like last week Rochdale dove straight into the match, undeterred by the fact they were playing an unbeaten team, and the two teams looked to be evenly matched.

After a Didsbury attack, Knowles and McDonald made a valiant push up the pitch, getting right into Didsbury's defence before they were stopped. Didsbury's counter attack was easily seen off by Owen and the free hit afterwards was stopped by Leech.

After some back and forth between the two teams Rochdale managed to break through with some excellent one-two work from Hodcroft and McDonald which Pickering did well to keep in at the baseline. Didsbury managed to intercept but Newton tackled to win it back for a tussle in the D. A stray defensive ball into Newton gave Rochdale a short corner. McDonald hit it to Burrell at the top of the D who passed it off to S Ransome who took a shot where there was free space on the right hand post, but unfortunately it went just wide.

Didsbury were just as determined as Rochdale and pushed back for their own attacks, but some good hustling and chasing from S Ransome slowed them down before they came up against the wall of Collinson and Owen in the centre of Rochdale's defence with Knowles and Leech backing up and creating space to get the ball back to the Rochdale midfield.

The few times keeper Brammer was troubled she saw the attempt off with a well placed save. The whole team tracked up and down the pitch well to cover and attack. Hodcroft and McDonald did some excellent work intercepting and tackling at the top of Didsbury's D to keep Rochdale on the attack as much as possible.

A cracking free hit from Leech created movement to open up the space, but Didsbury were able to recover to defend and ultimately see off the attack. Knowles picked up the ball and ran it down the right wing before a Didsbury tackle saw the ball off the baseline giving McDonald a long corner. Burrell and Pickering managed to create some space for the ball, but Didsbury were able to mark Rochdale out of an real opportunity.

A sideline ball gave Knowles the chance to switch the play to the other side of the pitch, but her long shot to Newton was intercepted in mid-air by Didsbury, though Hodcroft was on hand to win it back before they were able to capitalise on it. Hodcroft passed it off to McDonald who hit it up the pitch to find Burrell who made a great effort to find some space to attack, but was outnumbered and unable to find an opening.

After seeing off another Didsbury attack Owen took a free hit up to Pickering who went on another run down the right wing on her own attack, a quick roll out to get around the defenders saw her into the D but the keeper was able to save her shot and to leave Rochdale without a goal.

Didsbury chose to mirror the tactic, running down the wing but Knowles channeled them well to prevent them from passing the ball, before Collinson took over to stop them from having an easy route into the D. Didsbury finally managed to find a player to switch the play to, but Owen blocked it with ease allowing Leech to clear it out to the side.

Didsbury kept pushing, but McDonald and S Ransome were on hand to help Collinson mark out the Didsbury players to give Leech enough space to tackle and then drive it halfway down the left wing before Didsbury were able to halt her run. Leech took the sideline free hit and smashed it to Hodcroft who weaved between and battled with opposition players before being awarded a free hit. McDonald took it as Rochdale pushed up the pitch but Didsbury had also rallied.

Eventually Didsbury were able to open up enough space in Rochdale's D by constantly switching around the D and land themselves the first goal of the match.

Disappointed but not deterred, Rochdale dug in and retaliated with their own attack. A free hit from Didsbury's defence was easily intercepted by McDonald who won a free hit on her run into Didsbury's defence, after which she changed tack and dragged it more to the side this time and attempted to cross it to the far post but it deflected off the opposition.

Didsbury's second goal came from their movement pulling Rochdale away from the D before overloading with attackers before Rochdale could recover to give them the space to create a three on two scenario.

With Didsbury playing in bunched groups Collinson worked tirelessly to cover both sides as they switched it around the back each time an attack was seen off by Rochdale's defence. Knowles was able to hit it back up the pitch to S Ransome, but she was unable to find a way through the opposition. After a midfield battle Hodcroft was able to hit it into space on the right wing for Pickering to run onto, unfortunately it was slightly too far ahead and slightly too fast for Pickering to reach despite her best efforts.

S Ransome was able to take a defence clearance into the midfield and drive it down the pitch to pass it to Knowles at the top of Didsbury's D, with a defender in her way Knowles turned and rolled it out to open up some space and took her shot once she was back in the D and landed herself a goal.

Despite some excellent work from Rochdale's defence, especially J Ransome coming on with some fresh energy and Brammer making some excellent saves, Didsbury got lucky with their third goal where an attempt to defend the ball deflected it right in front of the keeper.

The final score was 3-1 to Didsbury, with Rochdale's goal scorer Becky Knowles.

Captain Knowles said: "A great team effort was shown today, we battled well and each week we are getting stronger.”