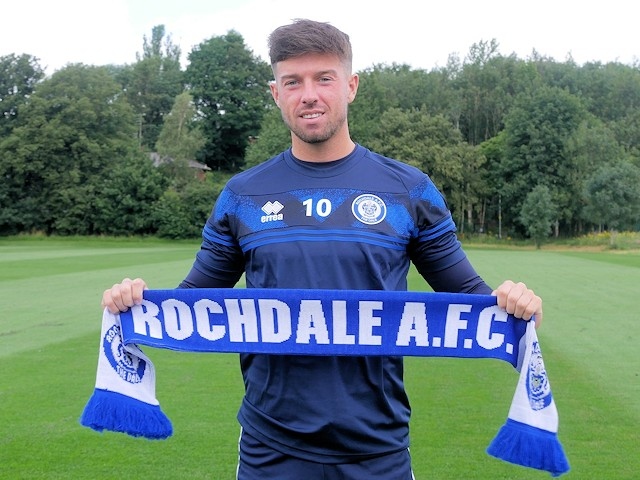 Rochdale recorded their biggest away win since 2006 with an emphatic victory over Wigan Athletic at the DW Stadium last night (Tuesday 15 December). Goals from Kwadwo Baah, Matty Lund, Stephen Dooley and a brace from Alex Newby sealed a five star performance from Brian Barry-Murphy’s side.

The Dale manager made two changes to his starting line-up with Jim McNulty and Kwadwo Baah coming in for Tolaji Bola and Stephen Dooley.

Baah’s inclusion from the start certainly paid off when the youngster rifled in his first senior goal after just four minutes from the edge of the area.

That goal set Dale on course to victory that was hugely deserved and the scoreline could have been more emphatic. Matty Lund’s side footed effort was blocked by the legs of Jamie Jones in the Wigan goal but he wouldn’t be denied for long. Aaron Morley’s corner found its way back out to the midfielder and when he clipped a cross into the area; Lund was on hand to glance the ball in from close range.

The home side, who had won their last two league games, almost got back into the game but for a brilliant save from Jay Lynch. The Dale stopper was quickly out to deny Tom James whose angled shot looked on course to half the deficit.

A very rash challenge on Dale’s Jimmy Ryan saw him replaced by Stephen Dooley in the 41st minute with the Irishman getting in on the goalscoring just shy of the hour mark. Matty Lund’s burst through the middle created space for Dooley to run into and when he cut back he fired a low left footed shot into the bottom corner to make it 3-0.

The excellent Alex Newby got the goal his play deserved from the penalty spot after Stephen Humphrys was hauled to the ground inside the area; thesSummer signing from Chorley making no mistake from 12 yards for his fourth of the season.

As the game entered stoppage time, a brilliant goal line clearance from Dale captain Eoghan O’Connell preserved his side’s clean sheet as a looping header had Lynch beaten but the skipper headed clear.

Substitute Fabio Tavares helped create Rochdale’s fifth when his run and shot was blocked and fell kindly to Newby who drilled a low shot in off the post to put a seal on a remarkable performance heading into the busy Christmas period.