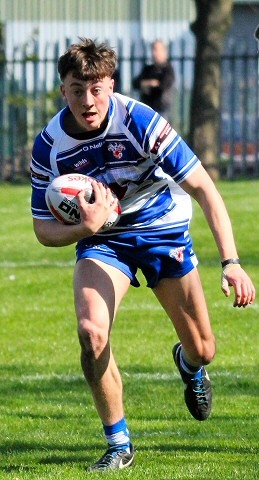 Matty Ashton during his Mayfield days

Former Rochdale Mayfield player Matty Ashton has been named the Albert Goldthorpe ‘Rookie of the Year’ for 2020.

Ashton won 38% of the vote in the annual readers’ poll by the League Express before Christmas.

22-year-old Ashton, who plays as a fullback for Warrington Wolves, played junior rugby at Mayfield under the tutelage of Dean Hartley and Marvin Connolly up to under 16 level.

He was trained by Matt Calland (now Rochdale Hornets’ head coach) at under 18’s level before making his debut in the Mayfield open age side.

Ashton joined Super League team Warrington Wolves at the start of the 2020 season after a spell at Swinton Lions RLFC during which he was named Betfred Championship Young Player of the Year.

Speaking in the League Express, editor Martyn Sadler said: “Matty has overcome some brilliant competition to win this award, which has previously been a catalyst for some wonderful careers.

“His rise from the amateur game to Super League is a wonderful story and an inspiration for many, who still haven’t got their opportunity after their junior rugby days have come to an end.

“I will very much look forward to watching the rest of his career closely.”

The Albert Goldthorpe ‘Rookie of the Year’ award was first created in 2008, recognising the best player with no more than 10 Super League appearances at the start of the season