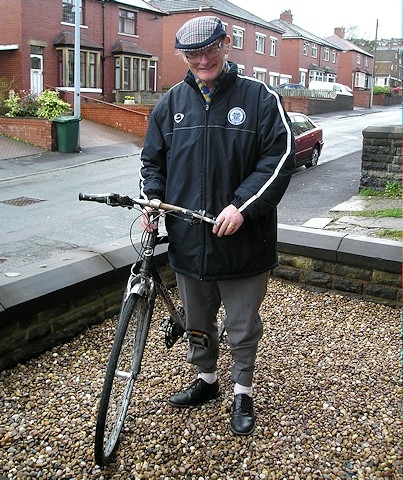 The fans want to retire David's seat in the ground's main stand and replace it with a statue of 'Cloughie' as he was known, sat overlooking the pitch.

David, 78, devoted his life to Rochdale Football Club and on his death in June 2020, he bequeathed his entire estate to his beloved Dale.

David, who lived in Littleborough and worked at the former Whittles Bakery, was a goldbond agent for over 25 years and served an incredible 800 members. During his time as a goldbond agent, it is estimated he raised over half a million pounds for the club.

A fundraiser to retire David’s seat and install a permanent tribute to his memory has raised over £5,000 so far.

The idea was taken from Spanish side Valencia, who did something similar for a supporter of their club in 2019. The club commissioned a bronze statue of fan Vicente Navarro Aparicio to be installed in his seat at their Mestalla Ground after he devoted his life to the club and still watched matches, despite losing his sight.

Fellow Dale fan Mark Cryer, who started the fundraiser, said: “This was just an unbelievable thing for Cloughie to do. I never met him, but his bequest struck me. I think everyone knew Cloughie but we didn’t get to say thank you for doing this for the fans. It’s eight months since he passed and we never got to say thank you.

“I can’t believe how this has taken off and I hope we do him proud. Every small club has a Cloughie and everyone can relate to him. We hope the statue will be in for next season.”

Executor of David’s estate, and friend, Richard Wild said: “I’m pleased people are getting to know what Cloughie has done for the club. I’ve been a friend of Cloughie for 25 years and I was part of the small group of friends who looked after him when he was ill.

“So many supporters from other clubs have donated and we’ve even had donations from Ireland. The more donations that are made, the better the quality of the statue.

“Cloughie would have hated the publicity, but it’s nice that the club’s unsung hero is getting the recognition he deserves and I think the fans appreciate him for that.”

David’s bequest – approaching £250,000 - will be used to buy a new electronic scoreboard for the Crown Oil Arena.

A firm has been appointed to supply and install the scoreboard which will be located on the fascia of the Reside Stand for all home fans to see. A structural survey has already been undertaken and it is expected the scoreboard will be in place by Easter and for when fans eventually return to the Crown Oil Arena.

In addition to a new scoreboard, David's estate has also funded an air conditioning system and a new ceiling to be installed in the 1907 Lounge. David was a season ticket holder in the main stand and he would be delighted that supporters will be able to take advantage of the upgraded facilities.

Rochdale's commercial director, Frances Fielding, told BBC North West Tonight: “He [David] really was an incredible, magnificent human being. His contributions made during his lifetime to Rochdale Football Club equal that of any player, manager or legend within our history.

“His name will be remembered in history at this club.”