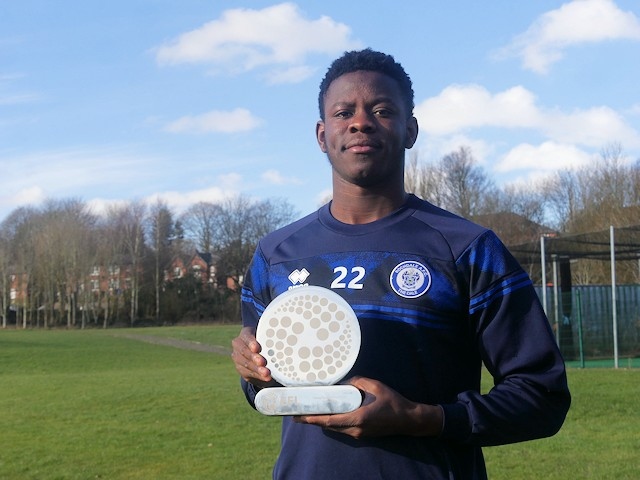 Kwadwo Baah with his EFL Young Player of the Month award

Dale's top scorer this season, with 12 goals in all competitions, Lund has played in all but one of Dale's league games this season to date. In January he scored four goals and had three assists.

18-year-old Kwadwo Baah has been named the EFL Young Player of the Month for January. He scored a stunning brace in Dale’s 4-4 draw at Charlton Athletic and his strike from the edge of the box was chosen as the goal of the month by fans.

Lund said: “Personally, and for the squad, it’s a positive thing for us all. I’m glad I’ve got the recognition for January because I thought it was a good month for me. Having scored a few goals I thought I might be in contention to win it, so it’s obviously nice to be recognised and for people to see what we’re doing at Rochdale.

“I’m full of confidence - I always go into games thinking I can score goals. This year it has probably paid off a little bit more and the chances seem to be going in a lot more, which I’m pleased about from a personal aspect. It’s something that I always look to do in games, get close to goal and try to get as many as I can for the season. They’re coming a little bit faster than they usually do, so I’m quite happy with that.”

Rochdale manager Brian Barry-Murphy said: “It’s fantastic recognition for Matthew, who has been amazing for us all season. Without even realising it, he has become a mentor and a great influence on all of the squad. He has become a real senior figure in our squad and someone who the players look up to and admire, and rely on for leadership.

“He has always been a really dangerous player attacking-wise for us, but he has taken it to the next level this season. He’d be the first one to acknowledge that the players have been doing everything in their power to provide him with the ammunition he needs, but there has been nobody better at getting into the box from midfield and forward areas this season. We’re very privileged and very happy to have him at our club.”

Sky Sports’ EFL pundit Don Goodman said: “If it’s goals you want, then Rochdale are the team to follow, as they can’t stop scoring at one end but can’t keep the ball out of their own net at the other! A remarkable 35 goals found the net in seven Rochdale games and of the 17 they scored, Matty Lund was involved in plenty.

“A quartet of goals and three assists is a sensational return for a player who resides in the midfield area and he’s more than deserving of this award.”